Can The Injury Bug Take A Hike Or Something? (UPDATED)

I know injuries are part of the game, but this is getting a bit ridiculous.  After last night, the Yankees have 4 more guys with injury/health issues to add to their list of walking wounded.  3 of them left the game because of their issues within 3 innings of each other!  Bodies are dropping so fast I feel like I'm watching the D-Day invasion scene from "Saving Private Ryan."

Dave Robertson's rib problem is bad enough that he's getting it looked at today.  If it turns out to be something with his oblique, he could miss some time, which would likely cause another round of roster shuffling moves to fill out the bullpen.  Obliques injuries tend to linger and take a long time to heal, so here's hoping for the best.  Ivan Nova's foot/ankle sprain doesn't seem too bad, but Joe acknowledged that it might be enough to cause him to miss his next start.

All of this on top of Brett Gardner's recent setback with his elbow, Chavez's little whiplash fiasco, Swish's continued muscle tweaks, and Teixeira's seasonal allergies or whatever he has blocking his airway.  And just to top it off, there's still Mo's torn ACL, Pineda's torn labrum, Cesar Cabral's elbow fracture, and Joba's ankle dislocation.

Somebody call in the meat wagon.  New guy's in the corner puking his guts out.

** UPDATE- 3:10 PM- Dave Robertson has officially been placed on the disabled list with a strained left oblique.  No word yet on how long he'll be out, but it likely won't be quickly.  Per Marc Carig, Cody Eppley has been recalled to take D-Rob's spot on the active roster. **
Posted by Unknown at 1:07 PM No comments: 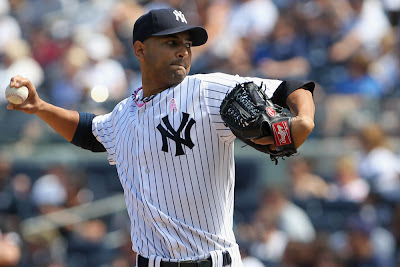 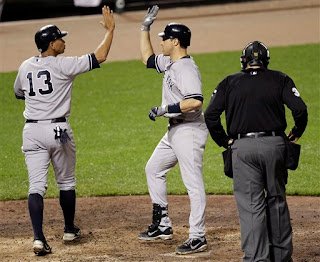 (A-Rod responds to the latest Teix Message.  Courtesy of The AP)﻿

Ivan Nova had already faced Baltimore twice this season in a little over a month.  In one start he gave up a lot of hits but managed to escape trouble, and in the other he gave up a lot of hits and didn't.  His ability to change up his routine and effectively mix pitches was going to be something to watch, and the poor weather conditions weren't going to make his outing any easier.  It certainly didn't look like they were going to be able to get the game in, but they gave it their best shot.

- First pitch came only 15 minutes later than scheduled because of the rain, and it quickly became apparent which pitcher was affected by the slight delay and which one wasn't.

- Jason Hammel came out and dispatched the Yankees with just 24 pitches in the first 2 innings.  He struck out 3 and looked very sharp.  Nova, on the other hand, labored through a 20-pitch 1st inning, giving up an RBI single and RBI double in the process.  The rain was falling, he was up in the zone, and it looked like it was going to be a long night.

- The Yankee offense looked like they were swinging more to move the game along than to score runs through the first 3 innings, but Hammel wasn't so lucky the second time through the order, as Nick Swisher drove in A-Rod and Cano with a double to right in the top of the 4th.  The third time didn't get much better for Hammel, as he surrendered a solo HR to Curtis Granderson with 2 outs in the 5th to give the Yankees a 3-2 lead.

- We got glimpses of Ivan The Great and Ivan The Terrible in Nova' inconsistent outing.  He managed to work quickly through the 2nd and 3rd innings, and avoided any trouble after letting the first 2 guys get on in the 4th, but then promptly gave up 3 runs on a walk, triple, and 2-run homer by J.J. Hardy in the 5th to give Baltimore the lead back.


- Nova's issue, as usual, was his inability to spot his pitches where he wanted to in the strike zone. We didn't get a chance to see if he could correct the issue in the 6th after Nova injured himself fielding a grounder for the first out of the inning and had to leave the game.

- The Yankee offense was relentless after losing the lead in the bottom of the 5th. They came right back and tied the game at 5 in the 6th by loading the bases against Hammel and capitalizing on an error by Chris Davis, took the lead back on a 2-run Teix Message in the 7th, and scratched across an insurance run in the 9th after a 1-out double by Teix. The only inning that the Yankees didn't put a runner on base all night was the 2nd, and they put at least 2 on in every inning after the 3rd.

- Strangely enough, Clay Rapada also had to leave the game with a viral infection after coming in to relieve Nova, and it was all hands on deck for the rest of the bullpen, who responded with 3.1 scoreless innings, allowing just 3 hits and striking out 6.  Rafael Soriano got the call for the 9th with D-Rob nursing a sore ribcage.