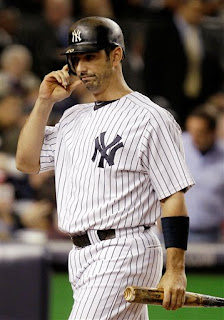 (Courtesy of The AP)
It's been Jorge Posada Day over at LoHud today.  The one post that stood out to me was this one linking Posada and Bernie Williams and the similar paths their Yankee careers took at the end.  And within that post, I found this comment by Jorge to be particularly interesting when he was asked if seeing what happened to Bernie five years ago prepared him for this past season:

“If you asked me that question in February of this year, I would have said, no,” Posada said. “But now, I would say, yes. It went the same way, pretty much.”

Uhhh, Jorge?  Are you serious?  You really weren't prepared for your Yankee career to end after this year?  How could you not see the writing on the wall?  You were in the last year of your contract as a 40-year-old catcher with abominable defensive skills.  After years of letting that criticism slide, the team flat out told you well before Spring Training that you weren't going to catch anymore and to prepare to be a DH.  The picture was already being painted for you for this to be your final season before the season even started.  And as the season progressed, your role became increasingly smaller as your offensive skills eroded, and the Yankees focused on Russell Martin and Jesus Montero as their new catcher/DH tandem of the future.

If Jorge honestly didn't think that 2011 was going to be his final year in pinstripes, then I really don't know what to say.  On the one hand it makes the whole situation a little sadder, knowing that he played like shit all season and got relegated to platoon status after thinking he was going to be back in 2012.  On the other hand, I have to knock him for being a bit of a dope for not expecting this.  Just serves as a reminder that as hard as it is to watch our favorite players decline, it must be even harder for them to have to experience it.
Posted by Unknown at 1:53 PM No comments:

Does Ivan Nova Have A Chance To Win AL Rookie Of The Year?

(** Author's Note- I completely botched this and forgot that Alexi Ogando is not eligible for the AL ROY this year because he spent more than 45 days on a Major League roster in 2010.  So disregard everything related to Ogando below and just focus on the other candidates. **)

The Yankees have already been heavily featured in the early portion of MLB Awards season, getting shafted out of at least 2 AL Gold Gloves and then having Robbie Cano and C-Grand deservedly win Silver Slugger Awards for their respective positions.  But the real meat and potatoes of award season starts this coming Monday with the announcement of the AL and NL Rookie of the Year Award winners.  And for the first time since Cano in '05 the Yankees have a horse in the race for the AL award in Ivan Nova.  But how good is Nova's chance of really contending for the award?  Let's make like D-Generation X and break it down.

The way I see it, there are five other "real" contenders for the AL award besides Nova, two position players and three pitchers.  The two position players are Mark Trumbo of the Angels and Eric Hosmer of the Royals.  While others may try to make an arguments for Desmond Jennings or Dustin Ackley, those guys don't have a full season's worth of plate appearances under their belts and so my belief is that their body of work can't be looked at the same as those of Trumbo and Hosmer.  So how do these two stack up?

Trumbo's power numbers look good, which is something that old school voters always go for, but his OPS and wOBA suffers thanks to a low BA (.254) and low OBP (.291), both byproducts of Trumbo's low walk rate (4.4%).  However, Trumbo balances out those flaws at the plate by rating as an above average defensive first baseman and a decent baserunner.

Hosmer beats Trumbo in most of the sabermetric categories thanks to a better walk rate (6.0%) and a much lower K rate (14.6%).  He was a better all around hitter than Trumbo in 2011 but takes a knock in the WAR department thanks to a subpar defensive rating.  Considering that both guys played the same position this season, that could hurt Hosmer.

Nice first seasons for both of those guys, no doubt.  But the real competition for the award, in my opinion, will come down to the four top rookie pitchers in the AL this season: Nova, Alexi Ogando of the Rangers, Michael Pineda of the Mariners, and Jeremy Hellickson of the Rays.  Through both the traditional and sabermetric statistical looking glasses, these guys were the cream of the AL rookie pitching crop in 2011, racking up the top 4 innings totals amongst all AL rookie hurlers and thus creating a bigger body of work to more accurately assess their numbers and weigh them against their rookie counterparts (sorry, Zach Britton).  For the purposes of this comparison, the rankings indicated in the parentheses represent where each pitcher ranks amongst themselves.