Nova Solid In His Spring Debut

Ivan Nova followed up Hiroki Kuroda's "meh" Major League starter debut yesterday with a much better performance in his first spring start and first shot back at David Phelps in this year's 5th starter competition.  Nova threw 27 pitches in 2 scoreless innings of work, an impressive 22 of them for strikes.  He gave up just 1 hit, struck out a batter, and got 3 groundball outs.  After Phelps came into camp ahead of everybody else in his throwing program and made two good starts of his own before Nova got in a game, Nova responded in kind today.

The drama of the 5th starter competition, if there ever really was any, was weakened a bit this week with the announcement that Phil Hughes "might" not be ready for the start of the season.  Phelps would be the obvious choice to replace him and Nova would be bumped up to the four spot in the rotation.  But that still doesn't mean this isn't an important spring for Ivan as he tries to get ready to turn things around from last season's disaster, and today's outing was a very good start.  He looked sharp, commanded his fastball well, and consistently sat 93-94 with it.  When he's pitching like that, he's more than capable of being a better-than-5th starter.

P.S.- I don't know why, but I've had a good feeling about Nova since I started writing about him and Phelps competing for the 5th rotation spot this year.  I'm going to be paying close attention to him this spring because I believe in his K/BB trends from last season, and I think he can be a good pitcher if he cleans up his location.
Posted by Unknown at 2:48 PM No comments: 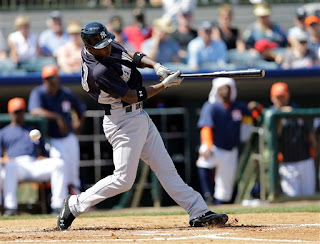 In Jennings' report, he mentions that the Yankees did not encourage Mesa to skip the WBC, and I don't see any reason why they would.  As long as guys are playing in the spring and getting regular reps, that's all that matters.  But in the same vein as Francisco Cervelli, Mesa probably saw the opportunity in front of him to earn a spot on the Opening Day roster after C-Grand went down and decided he stood a better chance of winning that spot by staying in camp and continuing to prove himself to the Yankee coaching staff.  That plan has worked very well for Cervelli so far, and if Mesa can continue to display his power and speed it could end up working for him as well.
Posted by Unknown at 10:27 AM No comments: