Too Many Extra Base Hits

You can basically name any part of the game of baseball and the Yankees aren't doing it well right now.  It's hard to remember a time when the team has collectively played this poorly for an extended period of time, and for once I'm actually glad I don't have the ability to watch them on TV every night.  Whether you accept them or not, there are some quasi-viable excuses for the poor performance from certain groups.  The lineup as a whole is old and dealing with the un-fixable problem of age-related decline, and the bullpen has been decimated by injuries and burdened by a heavy workload.

The starting rotation, however, really doesn't have an excuse to fall back on to explain themselves.  Losing Michael Pineda's services before they even had a chance to see them sucked, but they still have a healthy CC Sabathia, a healthy Hiroki Kuroda, 2 young guys in their primes in Phil Hughes and Ivan Nova, and the recently-added Andy Pettitte, who looks like he's got plenty left in the tank.  And yet the Yankee rotation currently ranks 26th in MLB in team ERA at 4.93 and 28th in FIP at 4.60.  I've touched briefly on the fact that Nova and Kuroda are getting absolutely killed on balls in play going for extra bases when they miss in the strike zone in a couple posts, but in looking at the bigger picture it seems that the XBH problem is a rotation-wide one.

The Next Wave Of Bullpen Help

What was a very deep and dominant Yankee bullpen earlier in the season has quickly disentegrated into a struggling group of pitchers who seem to be in over their heads lately. They were able to tread water for a week or so after Mo and D-Rob went to the DL, but in the last games the lack of depth and lack of lights out talent has started to be exposed. Cory Wade and Boone Logan have both given up runs in their first appearances as the new bridge to the closer. That closer, Rafael Soriano, is still a bit of an adventure, and guys like Clay Rapada, Freddy Garcia, and Cody Eppley are being used in higher-leverage situations than Joe probably ever wanted to have to use them.

Combine all of that with the fact that this current group is close to being overworked due to the rotation's inability to provide length, and the seemingly omnipresent threat of more injuries, and there's a very good chance that the Yankees are going to have to make some more roster moves to keep the bullpen fresh and productive. When that time comes, and it could come soon, there are some viable options in Triple-A that could be of service. 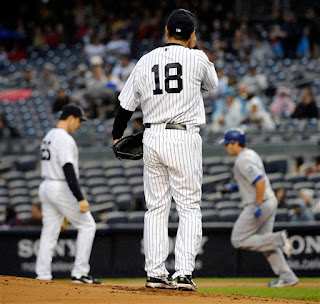 (No caption needed.  Courtesy of The AP)﻿

Staying above .500 and out of last place in the AL East was hanging in the balance last night in the Bronx.  It's a little strange to even be saying that 6 weeks into the season, but that's the way things have gone for the Yankees this year.  Poor performances aplenty, injuries galore, and a lack of timeliness both at the plate and on the mound have left the team in its current slump, and Joe finally decided it was time to juggle the lineup to try to help drag them out of it.  A good outing from Hiroki Kuroda would have been nice too, but I guess that would have been asking for too much.

- A lot of Kuroda's stuff was up in the zone in the 1st inning, even the pitch he struck Eric Hosmer out with, and it quickly bit him in the ass when he left a 2-2 fastball right over the middle of the plate to Mike Moustakas.  28 pitches to get through the 1st, and a 2-0 deficit.

- Kuroda definitely didn't have his A-game again, and gave up another run in the 3rd, but the Yankee offense didn't do much to help him.  After loading the bases with 0 outs in the bottom of the 3rd, the trio of Cano (K looking), A-Rod (K swinging), and Ibanez (flyout) each failed to plate a single run.

(** Full Disclosure- After this happened, I flat out stopped paying attention to the Gameday feed and just watched the Ranger game.  That also turned out to be a poor decision, but whatever. **)

- He managed to hold the Royals at 3 for the remainder of his night, but it could hardly be called an effective outing for Kuroda.  To throw 103 pitches and only make it through 5.1 innings, and to allow 10 baserunners in the process, is not a good thing.  Seems like Kuroda is suffering from the same problem as Nova right now; every miss he has in the zone gets punished.

- Cody Eppley and Clay Rapada got a few outs in the 6th and 7th, and then Freddy Garcia came on.  He gave up a 2-run home run to Jeff Francoeur on a belt-high splitter right over the plate on his 2nd pitch, another run on a wild pitch in the 7th, and the rout was on.

- For the 2nd time this year, Felipe Paulino absolutely dominated the Yankee lineup.  He worked 6.2 clean innings, only walking 2 and striking out 8.  There isn't a single guy in the lineup right now who pitchers are concerned about facing and it shows.

- Final RISP Fally tally for the night: 0-13.  And the scary thought is, this game could have been a lot worse.  The Royals only went 1-12 with RISP themselves.