Been a little slow around the blog the last day or so with my 9-5 cutting into my time, but thankfully it's been relatively slow around Yankeeland as well.  Here are some of the smaller stories I've missed from the past 2 days:

- CC Sabathia threw his second rehab bullpen session yesterday.  It was another 25-pitch sesh, not sure if he mixed in any of this offspeed pitches this time.  Next one is set for Sunday and his pitch count should be bumped up.

- Michael Pineda is scheduled to play catch for the first time since his last setback on Saturday.

Big Mac was the king of the night last night and justifiably so.  Dude was swatting home runs over the short porch in right, speeding around the bases for 3-run triples to seal the game, and navigating a relatively young pitching staff through 9 innings of solid work to secure another win.  In looking at the box score this morning, I noticed another cool trend from last night, one deserving of its own post.  All 5 Yankee pitchers who pitched last night were under 30 years old and all 5 were homegrown players.

Chase Whitley, Adam Warren, Jose Ramirez, Dellin Betances, and David Robertson.  All drafted or signed by the Yankees, all developed through the team's farm system, all graduated to the Majors within the organization, and almost all contributing in very meaningful ways.  That's pretty cool.  When you can get 9 innings of 3-run ball with 2 BB and 8 K from a crop of your own pitchers against the best offensive team in the AL, that's gotta make your scouts and MiL people feel good.

For the season, that 5-some has combined to throw 149.1 innings.  They have a 2.41 ERA, 183 K/37 BB, and 4.6 total fWAR.  That's pretty damn good when you consider that Warren was working as a low-leverage middle relief guy at this time last year while Betances, Whitley, and Ramirez were all either working in different roles or just starting new ones in Triple-A.  Their overall track record when it comes to pitcher development doesn't look that great, but based on last night's game it would be unfair to say the Yankees completely suck at it.  There's at least a few things they have to be doing right.
Posted by Unknown at 9:00 AM No comments: 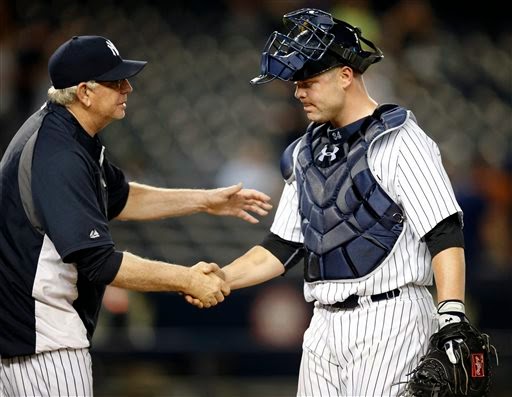