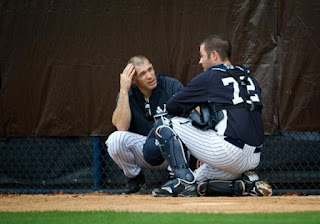 Of the litany of injuries that struck the Yankee organization last year, the defining body part was probably the elbow.  Elbow injuries affected veteran and prospect alike in 2012, prematurely ending more than one season, extending to end one player's 2013 season, and lessening the impact of some of the key Major Leaguers.  If the first 2 days of full-team camp are any indication, this season's injury area du jour is shaping up to be the back.

Two days of team workouts complete, two back injuries.  Mark Montgomery was scratched from a scheduled bullpen session on Monday with a back strain, and has yet to have another session scheduled.  Yesterday, it was Phil Hughes who was shelved for a few days with back stiffness after hurting himself in a fielding drill on Monday.  Neither injury is expected to be serious and both players are expected to be back soon (no pun intended), but back injuries have the tendency to linger and can turn into a recurring problem if not given enough time to fully heal.  Just ask Austin Romine.

I'm not trying to scare anybody or stir shit up in the first week of camp here.  But if another player hurts his back today...

** UPDATE 9:35AM- And the AB4AR jinx strikes again!!  New report on Hughes, via George King and Joel Sherman of The Post, has him diagnosed with a bulging disc in his back after visiting a spine specialist yesterday.  He is going to be out of action for at least 5 days, possibly up to 2 weeks. **

Posted by Unknown at 7:26 AM No comments: