On This Day 10 Years Ago 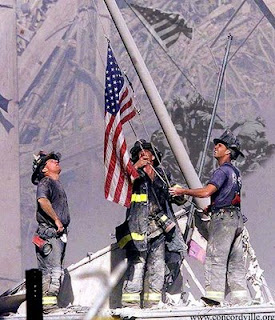 On this day 10 years ago, I was just a sophomore in high school.  And I remember very early in the morning talks starting around the hallways about plane crashes around the country.  Nobody really had the real story, and over the next couple hours I heard so many different versions of what was going on, that I started to become legitimately worried that our country was under attack.  For the rest of the day in school, we pretty much stayed glued to the TV or radio as we went from class to class and as I started to see the images of the wreckage at the World Trade Center and the Pentagon, I knew that something was very wrong.

By the time I get home from school in the early afternoon, my parents were both already there, also glued to the TV.  I walked into our living room and asked them what had happened now and they told me that Mike was missing.  I laughed and told them that no he wasn't.  My brother Mike was also home from school and safely in the other room watching TV.  They told me that they weren't talking about my brother, they were talking about my uncle, who at the time wasn't my uncle yet but was my aunt's boyfriend.  I knew he was a NYC police officer, but it was that day, September 11, 2001, that I came to know that his patrol area was the World Trade Center, and that he was one of the first responders on the scene after the first plane hit the North Tower.  Hours later, after both towers had fallen, nobody had heard from him, nobody knew what had happened to him, and nobody knew where he was.

Miraculously, my uncle survived.  He was one of the lucky ones that day, and to hear him tell the stories of what had happened to him that day gave me a greater appreciation of not only how horrific things were that day at Ground Zero, but also of what it means to be a true hero and who true heroes really are.  We are raised to look up to the actors, musicians, athletes, the beautiful people.  Most of us never stop to consider the everyday heroes that are all around us: the doctors, the teachers, the soldiers, the firefighers, the police officers.  And while people like Derek Jeter and Alex Rodriguez and CC Sabathia may dazzle us with their performance on the baseball field, and they along with the rest of the Yankees provide all of us fans with so much joy and happiness, they are merely men playing a game for a living.  They aren't the real heroes, and they would be the first ones to tell you that, especially on a day like today when we all look back and remember the tragedy of 9/11 and all the heroes who gave their lives that day.

Every year on 9/11, my thoughts always go to my uncle and I try to think about what he had to endure that day and how he's coped with those experiences ever since.  I don't think I will ever understand the hell he went through, and so I choose not to discuss it with him.  But I think back to that day, when I came to the realization of who my uncle was and what he did and I can't help but be in awe of him.  His actions, and the actions of so many others that day, were far more heroic than anything that anybody could do on a baseball field.  I thank him and I thank every other member of the NYPD, FDNY, PAPD, and all of our soldiers fighting overseas for the sacrifices they've made and the sacrifices they continue to make.

And if you haven't done so already, take a minute to reflect today on your thoughts and feelings from 10 years ago.  And offer your thanks and your prayers to someone you know who's a hero.  Without them, we wouldn't have the freedoms that we have in this country.  And that should never be taken for granted.
Posted by Unknown at 4:51 PM No comments:

... Holy balls, it is!  That's Jorge Posada behind the plate.  With his catching gear on.  Catching!  In an actual game!!! 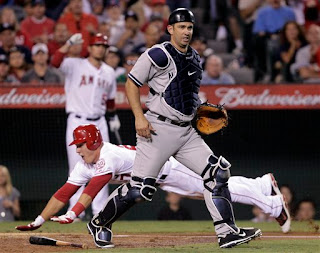 (Courtesy of The AP)﻿
That's when you know things aren't going well.  And 1 run scored in the last 25 innings while the team's entire staff of catchers heads to the ER is not well.
Posted by Unknown at 10:34 AM No comments: