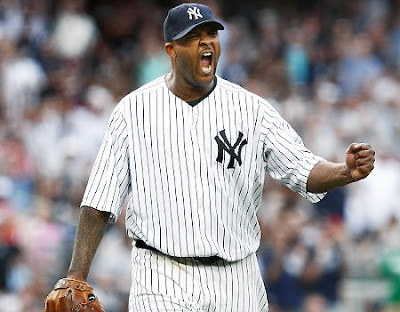 7 2/3 of no-hit shutout ball from CC today before being taken out.  He also walked 2 and K'd 5.  I'd call that a much better second act after last Sunday.

And whataya know?!  Mark Teixeira is 3-4 today with a ribbie and 2 runs scored.  Either Joe is starting to develop psychic abilities or he paid off Wade Davis to serve a few over the plate today.  Either way, Teix looked real good at the plate today and that's what's most important.

Still 8-0 in the top of the 9th, but the ending is just a formality now.  The important thing is the Cy Young-caliber ace of the staff and MVP-caliber first baseman played more like the Cy Young- and MVP-caliber players they are.
Posted by Unknown at 5:18 PM No comments:

Has Anybody Seen Mark Teixeira?

Well it's another year and another terrible April so far for Teix.  In 4 games he is 0-16 with 2 RBIs coming on walks and a .158 OPS that is made up completely of the "O"-part.

The good news is that the issue doesn't seem to be Teix not seeing the ball or being fooled at the plate.  In his 16 at-bats he has struck out only twice, so he's seeing the ball and making contact.  The problem has been that it's been weaker than weak contact.

I think the issue might be Teix's approach, which is something I commented on after the opening series against Boston.  Teix seems to be pressing a bit, swinging early in the count and either getting himself behind and forcing himself to have to swing to protect, or just swinging at less than desirable pitches that he can't do much with.  He did it with the bases loaded against Boston late in the game on Wednesday, hacking on the first pitch, something you hardly ever see him do in a situation like that, and in his 4 at-bats last night Teix only saw 11 pitches, less than 3 per at-bat.

Being impatient at the plate is more than likely making Teix's swing mechanics a bit rushed and his balance is probably a bit off on his swing mechanics.  He appears to be reaching for the ball, lunging at it, and thereby sapping himself of his power generated through his hip rotation through the zone.  Unfortunately I don't have DVR on my TV or the other technology to bring up screen shots showing this, but that's what the other blogs are for.  These are just my thoughts on what Teix's problems are based on what I've seen so far watching him and what I've read in the box scores of the games.

Joe said after last night's loss that he's "got a feeling it's going to happen tomorrow" in refernce to Teix breaking out of his early season 0-for and I certainly hope he's right.  We saw Nick Johnson get off the schnide last night, so Teix is the only one of the regulars without a hit.  We know he isn't going to be this bad all season, and we know his numbers at the end of the year are going to be around the MVP-level they were in 2009.  We just want him to get over this mini-slump ASAP and not drag it out over the entire month like last season.
Posted by Unknown at 12:17 PM No comments: