Adios For The Weekend, Kiddies

Yes, it's a big weekend with Yanks-Sox for 4 games on tap and yes, I should be covering the shit out of it.  But some of my boys from the East Coast are coming out to Wisco and it's my duty as their friend and gracious host to get them completely shitfaced drunk and fill them with as much artery-clogging deep fried goodness as I can before escorting them out to the local watering holes to drunkenly hit on the finest female forms that the Greater Milwaukee area has to offer.

That being the situation, there will not be any new material on the site for this weekend.  At least not any new material worth the time spent writing it.  No, anything you see on here over the next 4 days will the drunken incoherent ramblings of a man either incredibly elated or incredibly pissed off at what he saw flash by on the ESPN scroll.

So if you're looking for a Yanks-Sox fix, I would advise you to look elsewhere this weekend and we'll be back next Tuesday to catch up and review what will hopefully be a glorious weekend for the Yankees that ends with them back atop the division where they rightfully belong.

Godbless, good people.  And go Yankees!
Posted by Unknown at 4:20 PM No comments: 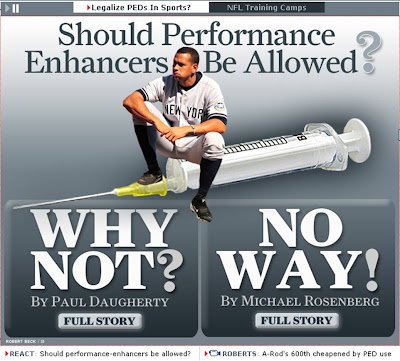 I would expect this kind of cheap, blatant anti-Yankee rhetoric from ESPN because that's just what they do, but not from SI.  Just a sad, pathetic, lazy display by the folks there.  Leave A-Rod alone, people.
Posted by Unknown at 2:41 PM 1 comment:

A short work week is almost over for me.  For the rest of you suckers, here's some stuff to help fill your break time and beyond:

- Via twitpic, here's the ball that A-Rod hit for 600 yesterday.  Something tells me he used his centaurian powers to hit it to deep center knowing it was his best chance to get the ball back without having to sign tons of shit and take some schmuck out to eat with him and Cameron.

- Ian O'Conner at ESPN NY acts as the turd in the punch bowl on A-Rod's home run with his 'wah-wah, why did he have to take steroids?  Now the number is meaningless' column.  I knew this would happen, I predicted this would happen, and that's why I don't care about 600.  But if you do, then read this and nod your head like a drone.

- Joe Paw at RAB examines Phil Hughes' recent resurgence over his last 2 starts and points to his improvement with his fastball as the major cause for Hughes' improved outings.  The big question is still whether or not Hughes can keep this up as he approaches his innings limit.  Fatigue is a bitch.

- Kevin at ...Baby Joba moves on to wondering why Chad Gaudin is still on the roster while J-Alba continues to waste away at Triple-A.  Now that Chan Ho is gone, Gaudin is the last of the bullpen dead weight.  I'm fully on board with Kevin here; it's time for Gaudin to just gau (see what I did there?)

- Josh W. at Pending Pinstripes takes a look at some of Brett Gardner's seasonal batting breakdowns to determine if pitchers are changing their approach against him.  The numbers certainly suggest they are, and I would have to say that's a smart move given what Gardner has done this year.  Fear Brett Gardner, FEAR HIM!!!

- It's not like we need any reminders of how great Mariano is, but just in case you wanted one, SJK at NoMass compiled some insane numbers showing just how great Mo has been this year and over the last 3 years.  I just hope I'm still alive at 38, 39, or 40, let alone being as good at something as Mo is.  Way to set the bar high for the rest of us, Mo.

- Joel Sherman at the Post has a column today about how A-Rod still has time to alter his image in the eyes of the public as he continues forward in his career with his new approach to the game.  Awwww, sounds like The Horse finally won Joel over.

- It has nothing to do with the Yankees, or even baseball for that matter, but Patrick Hruby at ESPN has a huge story on the the history of the Madden video games.  It's scary to think about how big that franchise has become and even scarier is the fact that I have always completely sucked at Madden.  This is still a great read though, so check it out.
Posted by Unknown at 12:09 PM No comments:

This has already been on Barstool NY, but it's funny as shit so I'm writing about it anyway.

This just goes to show the difference between Yankee fans and other fans.  Mets fans just sit on their ass and whine and boo as their team lays stinkbomb after stinkbomb on the field and then line up to call into WFAN the next day.  Red Sox fans sit and message each other back and forth on the Blackberries and barely even watch the game, then stand up to sing "Sweet Caroline" and call it a day.  But Yankee fans not only show up and pay attention to what's going on, some of them actually GET INVOLVED IN THE GAME.

I mean look at this guy!  He's got that whole bleacher section covered.  No way anything is sneaking through the gaps on his watch.  He doesn't even acknowledge autograph seekers as they come up to him.  No sir, he's 100% focused on the task at hand, and that's the sign of a championship-caliber team.  Sure, you can make the argument that any ball that reaches him is already a home run and so it doesn't really matter what he does, but that's not the point here.  The point is, this guy is dedicated to the max and you would never see anything like this at another ballpark. Shit, most other ballparks can't even get enough people in the bleachers themselves let alone guys who think they're part of the game.

P.S.- Wish I had a 12-pack of whatever that dude was drinking or an eighth of whatever he was smoking because I refuse to believe that he's that legit crazy enough to show up at a game and do this.

P.P.S.- How about a little stability on the camera holding there, Michael J. Fox.  I felt like I was watching that video from the bow of a passing ship in rough waters.