Swung on and a TOWERING pop up to the edge of the infield grass...

OH WHAT A PLAY BY JIMMY ROLLINS!!!  He backed up a good 4 to 5 steps off the dirt in the hole at second base and made an UN-BE-LIEV-ABLE two-handed form catch while standing still.  I tell ya, Suzyn, he AB-SO-LUTE-LY robbed Mark Teixeira of what would have been a sure bloop single with that catch.  But that's just baseball, Suzyn.

Thanks For That, A.J. Game 5 Thoughts and Afterthoughts 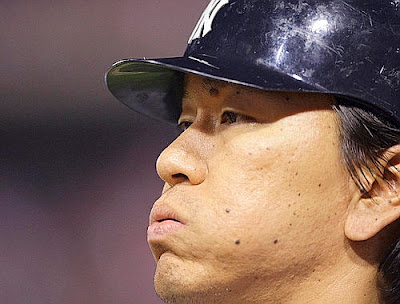 * Can someone explain to me why a Canadian bitch who hasn't been relevant in at least 5 years was singing the National Anthem of the United States before the game last night? I mean what the fuck, was the leader singer of Nickelback not available? Don't get me wrong, I think Canada does a great job keeping America's head warm, but unless one of their teams are involved, they shouldn't be anywhere near professional sporting events of this magnitude in America.

* Welcome to the A.J. Burnett Experience. This thrill ride of a coaster is sometimes rated among the best in the world, with high speeds, sharp curves, and enough drops to make even the toughest guy feel queasy and off-balance. Unfortunately, the A.J. Burnett Experience is also prone to breaking down periodically with no signs of being fixed soon, or just shutting down completely, thus never quite allowing itself to get the praise so many are ready to heap on it.

* Seriously though, if you didn't see that kind of outing coming from A.J. last night after the first 2 batters then you need your eyes checked. The Phillies made it perfectly clear they were looking first-pitch fastball, and after hitting Victorino to put 2 runners on, you knew A.J. was going to try to be careful and throw a strike down the heart of the plate. After that jack by Slickback, there weren't enough sandbags to beat back the waters gushing through the dam, but that's the pitcher A.J. Burnett always has been and always will be: maddeningly inconsistent and mentally weak to the point that he can't battle his way out of any serious adversity.

* And don't start with the short rest crap. The rest had nothing to do with it. Burnett's velocity was up just as high as it was in Game 2, but his command was nowhere to be found. He couldn't locate the fastball consistently and fell behind in counts, and he hit his spots with his curve only slightly more than the heater. The bottom line is Utley's homer in the 1st shook Burnett and he never recovered. No amount of rest was going to change that.

* And it's sad too, because Cliff Lee was nowhere near the pitcher the Yankees saw in Game 1 and still appeared to be a bit tired from his complete game ordeal. His velocity and bite were down on his pitches and the Yankees were making a lot of good contact off him early. After the first inning it seemed like we were destined to get the back-and-forth, high-scoring game that people had been waiting for with these 2 offenses.

* I give the guy credit for staying in the game because after taking a shot like that off the hand, I would have spent the next half hour rolling around at homeplate crying, but Joe Buck can cut the shit with the "Shane Victorino is as tough as they come..." rhetoric. Shane Victorino is a baseball player; guys in his sport miss weeks at a time with sprained ankles, strained quads, shoulder stiffness, tightness in the groin, blisters, bruises, etc. Those are the kinds of injuries football players would kill to have; those guys play with concussions, tears, broken bones. THAT is tough.

If Brian Dawkins got hit by that pitch last night, he probably would have jumped up and beat the shit out of the ball before walking to first so don't try to convince me that Shane Victorino is any level of tough when he stood around shaking his hand and grimacing all night even after X-rays showed nothing was broken.

* Is it me or are the Phillies ballgirls fucking hot?? That blondie down the right field line in Game 4 was all kinds of cute, and even though they didn't keep the camera on her long enough to get a definitive face shot, it certainly seemed like the brunette down the left field line last night had some things working for her. Google search "Philadelphia Phillies ballgirls" and you won't come up with a swimsuit calendar, but there are still a few in there who'll make you tingle, and kudos to the Phillies for bringing out the A-Team of that lineup for the postseason.

* I don't want to spend too much time on this again, but the "neighborhood" play at 2nd base when turning 2 is bullshit. If the guy isn't on second then he shouldn't get the out; it's a simple thing to do to place your foot on the base. Utley wasn't even close to touching the base in the top of the 3rd and they still called Damon out. Terrible.

* Great move by Joe to get A.J. out of the game in the 3rd and not let things get any more out of hand. It was still early enough that the Yanks could have come back and you have to give your team a chance. It was clear by that point that A.J. hadn't changed his approach to adjust to the Phillies' aggression at the plate and was just out there slinging it over the plate and hoping for the best, so you have to know when to pull the plug and Joe pulled it right when he should have. 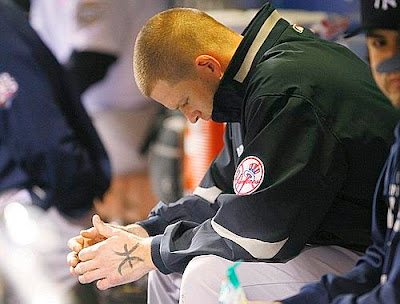 * Unfortunately, the Yankee bats never did come alive in the middle innings despite getting 4 solid shutout innings of relief from Dave Robertson (who knew he was actually a decent pitcher?), and Alfredo Aceves.  The Yankee strategy at the plate continues to puzzle me; they are watching way too many good pitches go by (see: Jorge Posada's at-bat in the top of the 7th inning), and are swinging and popping up or grounding out on pitches they should be putting in the seats (see: every Mark Teixeira at-bat in the series). What bothers me most is the looking at strikes, especially strike 3. You want to be patient and make the pitcher throw strikes? I'm all for that. But when the guy has you down 0-2, you can't be guessing or waiting for something anymore, you have to be up there hacking, trying to fight back and MAKE him throw the pitch you want instead of HOPING he throws you the pitch you want.

* After making him look much much better than he actually was from the 2nd inning on, it was almost embarrassing that the Yankees started pounding Cliff Lee and jumping on his first- and second-pitch meatballs in the 8th when he clearly had nothing left in the tank. They took 31 called strikes from Lee last night to only 3 swings and misses. 3!! What more proof do you need that the guy wasn't that good last night? How about 7 hits and 3 walks allowed in 7 innings?? He wasn't fooling anybody!

* It was nice to see Phil Hughes get a few outs with turning the field into a shooting gallery, but you can't get too excited when he was essentially sent in for mop-up duty, sapping all the pressure out of the situation. Until I see the kid get 3 outs to hold a 1- or 2-run lead in the 8th again, I'm not going to be impressed.

* Screw this MasterCard home run charity thing; if MLB really wanted to make some money they would start a charity based around Teixeira and Cano's pop-ups in the series. "Teix & Robbie's Pop-Up for the Troops Fund. For every pop-up Mark and Robinson hit in this World Series, the New York Yankees will donate 100 dollars to a fund designed to help get returning troops back on their feet and settled into a new job. 200 dollars will be donated if the pop-up is hit on the first pitch of an at-bat and 500 dollars if it's hit in a situation with runners in scoring position."

Tell me that's not fucking gold right there. If you implemented that, the returning soldiers would never have to work a day in their lives. They'd be opening up casinos and starting their own cruise lines.

What I'm trying to get at is that Mark Teixeira and Robinson Cano have been disgraceful at the plate in this series, especially Teix. He's first-pitch swinging in the 5th with Jeter on 2nd and he's flailing at junk not anywhere near the strike zone with Damon on in the 9th off the once again not-so-great Ryan Madson. He's off balance, swinging too hard, and pulling off the ball with every hideous hack he takes. If the Yankees wanted Gold Glove-caliber fielding with a 2-19 performance at the plate they would have signed Doug Mientkiewicz back for a hell of a lot less than you, Teix, so get your shit together.

* Jeter's at-bat in the 9th wasn't much better; 2-0, good hitter's count and he lets a fastball go down the middle. Then he lunges at a borderline pitch and grounds into a double play on the 2-1 offering. Just not what you expect from The Captain in that situation.

* While everybody else jumps back on the Philly bandwagon and gets hard-ons for a potential Game 7, consider these factors:

-The Yanks will get their full complement of offense back in the lineup for Game 6 on Wednesday. That means hello, Hideki, no more Swish in the 5-hole, a full game for Jorge, and Brett Gardner batting 9th where he belongs.

-Ryan Howard is completely lost at the plate. In fact, outside of Chase Utley, the Yankees have held the Philly offense in check through this series.

-The Phillies potential Game 7 starter wants to quit on his team, is getting in fights with teammates about wanting to quit, and even has his manager questioning him. You think his team is going to be pumped to play behind him if there is a Game 7?

-The Yankees will have Mo for 6 outs if need be in Game 6. He's thrown just 13 pitches in his last 2 outings and will have 2 full days' rest going into tomorrow night. If Andy gives them 6, which you expect he'll be able to do, the Yanks will have a mountainous advantage over the rotating pitching machine that is the Phillies bullpen.

In short, everything is fine. Everybody relax, have a few beers before work today, and enjoy the off-day. The Canyon's still getting cleared and the ring sizes are still being taken...

. But Teix still sucks.
Posted by Unknown at 7:21 AM No comments: