I'm a Buster Olney fan.  I think he's one of the best baseball reporters in the business, if not the best, and take his information and thoughts on the Yankees more seriously than probably any other beat writer or MSM reporter.  That's why I was a little surprised to find that Olney's "What Yankees need to go right in '13" Friday morning blog post (Insider Only) was so ordinary.  It's not that anything he said was wrong or untrue, it's just that a lot of it seemed so obvious and so basic that it didn't feel like a true Yankee-centric post to me.   Have the Yankees really become this boring this offseason?

I Guess Teix Really Does Want To Rock 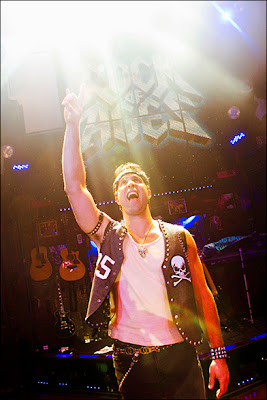 Everybody's so caught up in talking about A-Rod's retirement that's never going to happen until his contract is up that they missed Teix getting an early start on his next career after he retires from baseball.  On Broadway.  It certainly looks like the normally robotic first baseman was ELECTRIC in his cameo performance in "Rock Of Ages" on Tuesday, although there's no word on whether he pulled another hammy doing the dance steps.

(Photo courtesy of Playbill.  More can be found here)
Posted by Unknown at 10:56 AM No comments: