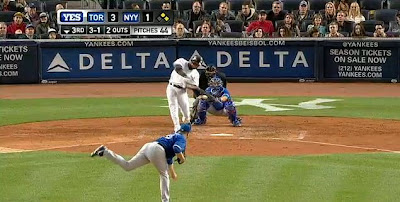 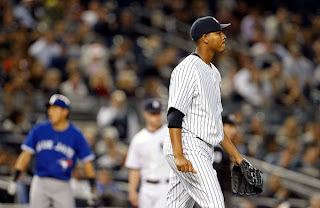 Despite coming away with a 4-game sweep of the Blue Jays, this past weekend was another costly one for the Yankees.  In the span of just a few innings and probably less than an hour of real time, they lost both halves of their starting battery on Friday night, losing Francisco Cervelli to a fractured right hand and Ivan Nova to what was officially diagnosed as right triceps inflammation.  I already spent some time on Saturday discussing Cervelli's injury and its implications, and I do believe that will be the greater loss for the Yankees , but there's plenty to consider with respect to Nova's injury as well.  Now that we know exactly what the injury is and that he won't be spending any time under a knife to deal with it, this seems like a good time to discuss.

By now, you've all probably heard this latest rumor about the Yankees doing away with their $189 million payroll plan for next season.  Jeff Passan of Yahoo! Sports released a story last Thursday, citing multiple sources, about the Yankee front office deciding that the plan for 2014 was "unlikely and impractical" and doing away with it to return to business as usual.  One quote from a "team official" was especially telling:

"It was a good idea to try, but deep down, we all pretty much knew it wasn't going to happen."

While the reasoning and logic referenced by Passan in the article is all sound, and the Yankees' ability to toe both the "fiscally responsible" and "championship-caliber team" lines is greatly questioned, I'm taking the same approach I took when Wally Matthews posted a similar story months back and waiting until the Yankees act in a way that's consistent with these reports before accepting them as gospel.  As with Matthews' story, Passan's piece here seems to be nothing more than educated speculation and connecting dots that may or may not be there.

The bottom line is that everything the Yankees have done (well, almost everything) since announcing their plan to get below the luxury tax threshold in 2014 has been in line with that plan.  All parts of that plan, the logic, the execution, the benefits, etc., can be questioned and it's the job of the media to do that questioning and try to uncover something of substance.  Until they do, however, or until the Yanks take it upon themselves to act in a way that suggests what Passan and Matthews wrote is true, there's no reason to dive headfirst back into the pool of free spending.