Mo Going Out With A Bang

Mariano Rivera picked up his 30th save of the season last night, an accomplishment that has to be looked at as impressive no matter how you feel about the legitimacy of the statistic.  To do what he's done this season at his age, coming off major knee surgery, is astounding and a testament to both Mo's other-worldly greatness.  The sheer number of saves he's racked up is a testament to the continued overachievement of the team this season.  Lotta close games, not a lot of runs being scored, little margin for error.  In typical Mo fashion, he's done the job time and time again.

To put his final season in perspective, Mo is on pace for 52 saves this season.  That would be his highest total since 2004 when he had 53 and would be only the third time in his career he's notched 50+.  He's also on pace for 66 appearances this year, his most since 2009.  He's striking out as many guys as he always has and he's walking a couple fewer.  Very few get to do it, but Mo certainly looks like he's going to go out on top.
Posted by Unknown at 10:18 AM No comments:

Labels: Mariano Rivera, Meaningful Statistics, The Greatest of All Time 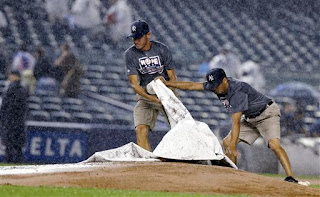 Crummy night at The Stadium last night.  It rained to start the game, it rained to stop the game in the 4th inning, and it rained once the game was restarted.  Tough conditions for players in the field and pitchers on the mound and yet the Yankees still managed to put together a shutout victory.  That's the Twins for you, eh?  Hiroki Kuroda made the start last night, and despite being forced to leave early due to the weather he was still good enough to get the W and get another winning streak started.

- It was a bit of a rocky start for Kuroda, who put 5 baserunners on in the first 3 innings, including a leadoff double in the top of the 3rd.  He had his sinker working though, and used it to get out of jams with GB outs.

- Plenty of opportunities for the Yankees early as well, albeit all by the free pass.  They drew 2 walks off Scott Diamond in the first 3 innings, 2 of them by Robinson Cano, but never turned anything into a real rally.

- Not really sure what anybody was re-thinking when the game restarted in the bottom of the 4th after a 73-minute rain delay.  Joe brought Kuroda back after that hour plus off to pitch, and it started raining again almost as soon as the game restarted.  Hirok worked around another 2 baserunners to get through the inning.

- Ron Gardenhire went to his 'pen for Ryan Pressly after the delay, and the Yankees got to hit for 2 runs in the 5th on another well-executed sac bunt/single combo and a big 2-out RBI single by Cano.

- Those were the only runs they got and they were the only runs New York would need thanks to their excellent bullpen work.  Preston Claiborne worked the 6th and put 2 runners on in the 7th, but then Boone Logan took over and struck out 3 lefties to get out of the inning.  D-Rob and Mo handled clean 8th and 9th innings.