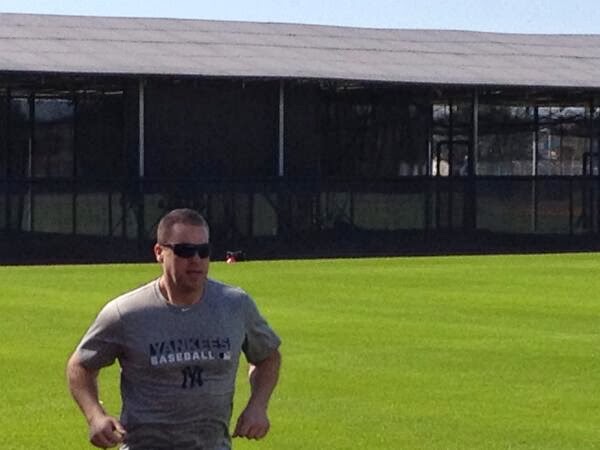 2 days.  2 days away from pitchers and catchers reporting to the Tampa complex to begin pitching and catching.  And running and stretching and fielding drills and all that other good stuff.  Baseball is so close to being back in our lives that I can almost taste it, and to keep the P&C preview going this week it's time to break down another group scheduled to start work on Friday.  On Monday it was the starting pitchers, today it's their shorter workload counterparts in the bullpen.  There's a few more open spots in the 'pen than there is in the rotation right now, and even more guys vying for those spots.  Here's what to expect and who to watch from the reliever crew.

Derek Jeter Announces His Plans To Retire After This Season (UPDATED)

We knew this day was coming eventually, but I'd be lying if I said I thought he'd announce it today.  Via a message posted on his Facebook page, Derek Jeter has announced that 2014 will be his final season.  Citing last season's injuries and the strain they've put on his ability to play the way he wants to play, Jeter said, "I know it in my heart.  The 2014 season will be my last year playing professional baseball."

Obviously a lot of different thoughts and emotions come with this announcement, as most people my age can't even remember what Yankee baseball was like without Jeter around.  I'll dive deeper into this when I've had time to process it, but for now I'll just say good for him for coming to the decision and good timing following in Mo's footsteps by making the announcement early and letting this season be the proper goodbye that he deserves.

** UPDATE 1:24 PM- Couple of beat guys have talked to Casey Close and gotten his confirmation that this announcement is legit.  Via David Waldstein, Jeter told Hal this morning to make it official with the team. **

** UPDATE 1:53 PM- Bud Selig has released a statement on Jeter's announcement, calling him "an exemplary face of our sport."  For once, I agree with what Bud's saying. **

Posted by Unknown at 1:21 PM No comments:

Yanks Need To Stay Aggressive With Their Outfield Prospects 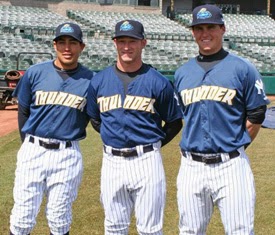 The double whammy of Alex Rodriguez dropping his lawsuits and Masahiro Tanaka being introduced to the press all but a put a bow on the 2013-2014 offseason.  In a few short days it'll be back to baseball. The focus will shift back to the diamond and the gaggle of new players that will be gracing it in Yankee pinstripes this season.  The outfield is arguably the most revamped part of the roster, with Jacoby Ellsbury and Carlos Beltran taking over for Ichiro Suzuki and Vernon Wells, Brett Gardner shifting back to left field, and a full season of Alfonso Soriano to look forward to.

The regular 4-man outfield rotation is set, which could leave very little playing time for Ichiro as the 5th outfielder and even less for Zoilo Almonte as the emergency 6th.  With this boost in outfield depth, it may seem like the Yankees have reason to pump the brakes on developing their group of top outfield prospects.  Mason Williams and Slade Heathcott are both coming off underwhelming seasons and are blocked in center by Ellsbury, and Tyler Austin is focused on getting and staying healthy and getting back on track offensively after starting his pro career mashing.  I don't say it that way though.  If it were me calling the shots on the farm, I'd say this is the perfect time to keep pushing these guys, maybe even more aggressively than before.

Marc Hulet of FanGraphs released his top 10 Yankee prospect list last week.  Yesterday he unveiled his top 100 prospects list for all of MLB and to no one's surprise the Yankees were not well represented, putting only 1 player on that list.  Naturally that player was Gary Sanchez, who came in 44th.  I know I always get real Yankee-centric on these posts, so if you're interested, Hulet's top 3 was Byron Buxton, Xander Bogaerts, and Oscar Taveras.  If you don't know who those guys are, look 'em up.

Rather than focus again on how poorly this reflects on the current state of the Yankee farm system, I'd instead like to touch briefly on what this and the other top 100 rankings say about Sanchez.  Let's be honest, the kid didn't have a "great" year in 2013, yet he still shows up on every top prospect list out there and shows up in the top half on most of those lists.  Everyone recognizes how much talent there is in Sanchez and how much time he still has to develop that talent at such a young age for his level.  If this can be the year that Sanchez starts to put everything together at the plate, he's an easy top 20 prospect next year and a fringe top 10.

P.S.- First of multiple post-Prospect Week plugs, here's the 2013-2014 AB4AR Top 30 again, headlined by Sanchez, in case you were on an extended vacation that week.