Between UConn completely sucking, my NFL playoff picks being absolutely terrible, the Cashman-Damon-$2 Million fiasco, the Yanks' unwillingness to commit to Brett Gardner as a full-time player, and the countless number of trades and signings of washed up and/or irrelevant "replacement" outfielders, there's been a bit of a negative vibe about the blog lately.  So to end the bitching and moaning, here are some reminders to myself, and all Yankee fans, that there are things to smile about in Yankeeland:

-The Yankees still obtained Curtis Granderson, a guy who has the potential to do everything Johnny Damon did offensively while also doing more defensively than Damon did.

-Adding Granderson and Winn to the pair of Gardner and the severely defensively underrated Nick Swisher, the Yanks will have one of the best defensive outfields in baseball this season

-That improved outfield defense will help AJ and Andy, 2 guys who can pitch to a lot of contact, especially fly ball contact when they aren't locked in, continue to put up numbers just as good, if not better, than what they put up last season.

-The Yanks now have another innings-eating horse (Vazquez) to go with their Secretariat (CC) who, even if he sucks like he did his first time here, will still help minimize any issues that could creep up in the bullpen this year.

-They have by far the best offensive infield in baseball that will come back a year more comfortable in New York (Teix), a year more mature (Cano), and a year more healthy (A-Horse).  There really isn't anything that anybody could want or expect Jeter to improve on this season, so you'll all just have to live with another .300+ avg./200+ hit/100+ run season.  The potential for what kind of numbers these guys could put up this year is scary, like Charlie Weis in a suana-scary.  Oh, and all 4 could win Gold Gloves too.  Just a thought.

-They have Jesus Montero in the minors just waiting to get up to the big leagues and tear AL pitchers apart.  The numbers this kid could put up as a catcher (assuming he stays at that position) would make Joe Mauer and Victor Martinez look like Brian Schneider and Jason Varitek.

-They still have this guy... 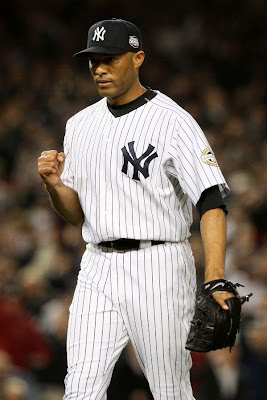 Ahhh, now I feel better.
Posted by Unknown at 6:10 PM No comments: