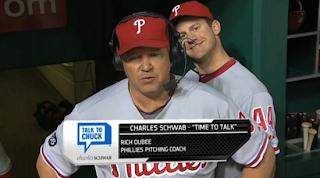 (Oswalt doing this to Joe mid-game next season could be fun)
We've already looked at the potential 2011 version of A.J. Burnett and the latest high-profile Japanese import.  Today, let's focus on the wily veteran of the free agent group, Mr. Roy Oswalt.

- He works fast and throws strikes, 2 qualities that seem to evade members of the Yankee rotation from time to time.  Oswalt works off the fastball mostly, and has a trio of offspeed pitches to use to get outs when he gets ahead in the count (curve, slider, change).

- He backs up his good stuff and aggressive approach with great command.  Oswalt's career BB/9 is just 2.09, and last year's 2.14 BB/9 shows that he doesn't appear to be losing his ability to throw strikes one bit.  And while his GB rate isn't as good as Wilson's (47.3% career, 45.1% last season), it still translates well to pitching in Yankee Stadium.

- As a 34-year-old veteran and a guy with a reputation as a consummate professional, Oswalt shouldn't come with any questions about whether or not he can "handle pitching in New York."

- Being a veteran approaching the downside of his career, Oswalt won't command nearly the years or the dollars that the other major FA starters will.  That gives the Yankees more salary flexibility and the chance to get more bang for their buck if Oswalt produces to his career averages.

- Injuries, injuries, injuries.  Oswalt has a few DL trips on his ledger, but the big issue over the last 2 seasons has been his back.  It was so bad this past season that there were talks of Oswalt retiring because of the back problems.  Regardless of the money or the years it takes to get him, you almost have to pencil in Oswalt for one significant chunk of time on the DL next year and have a contingency plan in place.

- While he career numbers are solid, Oswalt's stuff appears to be trending in the wrong direction.  His fastball velocity has dropped in each of the last 2 seasons, from 93.1 in 2009 to 91.4 this past season.  The values of all his pitches declined in 2011, with each of his offspeed pitches actually scoring as below average.  And his 6.02 K/9 in 2011 was a career low, as was his 8.0 Swinging Strike %.

- Making the switch from the NL to AL, while not likely to affect Oswalt's psyche, could put a dent in his production when coupled with what appears to be declining stuff.  Pitching to the Mets and Nationals lineups isn't quite the same as pitching to the Sawx and Blue Jays.

- The track record is solid, but at 34 and with injury question marks, Oswalt does represent the "aging pitcher on the downside of his career" category that got the Yankees in trouble in the mid-2000s and that they've seemingly been trying to avoid the last couple seasons.

- With rumors going around that Oswalt would prefer to stay in the NL and may even be going back to Philly under a new contract, the Yankees could be fighting an uphill battle if they're serious about him.

I think a 34-year-old Roy Oswalt would be a help to the 2012 Yankee rotation, even if I see him as more of a #3-type starter than a #2 pitching in the AL East.  His skill set and approach on the mound are solid and he'd be a good clubhouse guy.  Hell, maybe he could even help figure out how to make A.J. a consistent pitcher.  But with the big glaring injury risk in his back, I wouldn't offer him more than a 1-year deal with an option for a 2nd.  If there is real interest on Oswalt's part, and the Yanks can get him for $6-8 mil, I'd be all for it.
Posted by Unknown at 12:47 PM No comments:

And somehow CC Sabathia finished behind these other 2 in the AL Cy Young voting yesterday.  In the grand scheme of things it didn't really matter, as Justin Verlander all but locked up the unanimous award some time in late August.  But the difference between finishing 2nd and 4th in the voting probably cost CC what would have been a much-deserved bonus, a bonus he could have used to buy some more kickass custom Air Jordan baseball cleats.

I'm calling shenanigans on the BWAA.  This is ridiculous.
Posted by Unknown at 7:11 AM No comments: