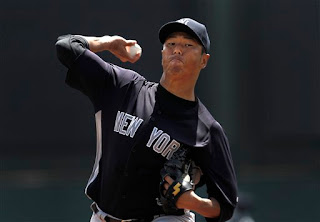 For the first time in what seems like ages, the Yankees enter a season without major questions in the rotation.  Sure, there are still questions, but not of the usual "Who's going to be the __th starter?" variety that has been the norm for the past few years.  The Yankees went out this offseason and made moves to fortify both the depth and the talent level of their rotation, starting with the new contract for CC and ending with the surprise signing and un-retirement of Andrew Eugene Pettitte.  There have been a few bumps in the road in Spring Training leading up to the final determination of the starting 5, and some who were thought to be a part of the Opening Day rotation won't be, but the Yankees head into the 2012 season with a no-doubt starting 5 intact and plenty of reserves on standby to cover for injuries or ineffectiveness.  The 2011 rotation ended up being sneaky good, much better than most people anticipated.  Expectations are much higher for 2012's group and they should be.  Despite the recent injury issues, there is no reason that the rotation can't be a major strength for the Bombers in 2012.

Starting at the top, CC Sabathia will once again be the ace of the staff, and as aces go you can't do a whole lot better than CC.  He's big, he's durable, he gives his team lots of innings, and he produces at a Cy Young-worthy level in those innings.  At this point, CC's transformation from thrower to pitcher is complete, as he has a firm grasp on all the pitchers in his arsenal and knows how to use them all to be effective against any type of hitter and any lineup.  The hefty lefty is coming off of his best season in pinstripes (3.00/2.88/3.02 with 8.72 K/9 and 2.31 BB/9 in 237.1 IP in 2011) and will be looking to build on that with another re-commitment to managing his weight.  He shed some pounds before arriving at camp last year, but over the course of the season put it all back on.  He has dropped a few LBs again in 2012, and is planning to make a concerted effor to keep it off and keep himself fresh over the long haul.  Despite his size, CC has never been a big injury risk, but as he starts to transition further into his 30s that injury risk becomes greater and the Yankees want to do everything they can to keep him healthy.  He's struggled with his command a bit in camp this year, specifically his fastball, but right now there's no reason to expect anything other than another stellar year from him.

The injuries to Michael Pineda and Cesar Cabral this past weekend added a little spice to what was going to be a rather boring final decision on the 25-man roster this week. The only real question was whether Cabral or Clay Rapada was going to get the final bullpen spot, and no offense to those guys but a "Rapada vs. Cabral" battle doesn't exactly get the media all stirred up. A second opening in the bullpen was created when Freddy Garcia was moved into Pineda's spot in the rotation, and the leading candidates for his long relief role are the trio of D.J. Mitchell, David Phelps, and Adam Warren. Those names doesn't exactly sell papers either, but they are the best options to fill what could become an important role in the bullpen once the season starts. The Yankees could throw a curveball and add another position player or send down Cory Wade, but I'm banking on Joe's familiarity with Wade being enough to give Wade a spot. I also think Wade getting that spot with how poorly he's pitched this spring necessitates another relief option in the 'pen, and I'm publicly throwing my support behind D.J. Mitchell for the role.

Mitchell has always been looked at as a relief conversion candidate internally because of his makeup. He's got 3 decent offerings, but nothing overwhelming and nothing that profiles as a big-time strikeout pitch. He also has the least consistent fastball command out of himself, Phelps, and Warren, something that dropped him below the other two in most every side-by-side-by-side prospect comparison. Because of these two factors, the perception has always been that Mitchell would struggle to mix pitches and get guys out the 2nd and 3rd times through a lineup at the Major League level and that he might be better served maximizing the value of his offerings in shorter outings. From his collection of 2-seamer, 4-seamer, slider, change, he should be able to find the 2, maybe 3 that work best in short outings and focus on developing those for relief purposes.

The other thing Mitchell has going for him is that he's worked exclusively in a relief role this spring, whereas Phelps and Warren have thrown more pitches and more innings to stretch themselves out as starters for Triple-A. All 6 of his Spring Training appearances have been in relief and all 6 have been between 2-3 innings, exactly what the Yankees would be looking to get out of their long man. Mitchell's overall ST line of 14.1 IP, 10 H, 4 ER, 8 BB, 12 K isn't head-over-heels great, but when you factor out his bad outing against Detroit on 3/24 the remaining line of 11.I IP, 7 H, 2 ER, 5 BB, 11 K is pretty damn good and a sign that there might be something to the theory of Mitchell's stuff playing up a bit out of the 'pen. It's also worth noting that Mitchell has been experimenting with a cutter this spring, and his attempts to work it into his repertoire during games could be a contributing factor to his recent outings not being as solid as his first few.

Mitchell was moved to the 40-man roster prior to the Rule 5 Draft, so the Yankees obviously see value in him and likely realize they are getting to the point of "you-know-what or get off the pot" time with him. They won't have to make any funky moves to get him onto the 25-man to open the season, and his presence in the Major League bullpen would open up a much-needed spot in the Triple-A rotation for Andy Pettitte and Michael Pineda to complete their prep/rehab work when the time comes. The Yankees could also use this as an opportunity to showcase Mitchell to teams interested in trading for him and ease a potential logjam in the Triple-A rotation that could creep up later in the season. And who knows? Maybe Mitchell finds something with this new cutter and finds his calling a late-inning stopper. There is really no downside to this move and everything is already set up to make it a smooth, painless transition. D.J. Mitchell as the 25th man to open the season should be a no-brainer.

The End Of The Yankees' 2012 FA Pitcher Search

Take a look at this blind career comparison of 3 starting pitchers:

Which one would you want on your team?  You really can't go wrong with any of the 3 to be honest.  That's 3 top flight starting pitchers all in the prime of their careers at ages 27 (A) and 28 (B and C).  Player A is actually Matt Cain, who became the richest right-hander in baseball yesterday by signing a new 6-year/$127.5 million contract with the San Francisco Giants.  Player B is Cole Hamels and Player C is Zack Greinke, and collectively these 3 would have made one of the best classes of free agent pitchers in baseball history after the 2012 season.  The Yankees could have been major players in that market, but after seeing what Cain got from San Fran I think it's safe to say the Yankees' pursuit of any of these 3 is over before it started.

Cain is a helluva pitcher, but the argument could be made that he's the third best out of this group.  If he's pulling in over $21 mil per year in his new deal, that all but guarantees Hamels and Greinke will get more.  Hamels' numbers are better than Cain's almost across the board and he has the added benefit of being left-handed.  Greinke's numbers stack up favorably to Cain's as well and he has a Cy Young under his belt and a track record of success in both leagues.  If Cain is pulling $21 mil, these other 2 are going to get more, and with the self-imposed 2014 payroll cap looming over them, that kind of money is going to be too rich for the Yankees' blood.

Chances are the Yankees weren't going to be heavily involved with these 3 anyway after making the Pineda trade, but if the price tags could have stayed in the $18-20 million range maybe we would have seen them make an offer.  No chance of that happening now, assuming Hamels and Greinke even make it to free agency.  Michael, Ivan, Phil, Manny?  You guys just became even more important.
Posted by Unknown at 7:22 AM No comments: