As I did with Andy Pettitte when he retired, here's a collection of the best stuff around related to Jorge's retirement.

- I know I linked to it in my own post this morning, but Buster Olney's piece on Jorge's career and his numbers is a must-read.

- The NY Times has a photographic look at Jorge's Yankee career.

- Tom Verducci's piece for SI does a good job of making a case for Jorge's inclusion in the HOF.

- At The Daily News, Bill Madden, if you're into that kind of thing, argues that Jorge's HOF case should be strengthened by the fact that he spent his entire career with one team.

- Kevin Kernan at The Post has a short, heartfelt piece on how Jorge deciding to hang them up was the right call.

- Mike at RAB takes a great trip down memory lane as he reviews "The Jorge Posada Game" against the Rangers on May 16, 2006.  Either this or the ALCS double is Jorge's defining moment, so check this one out if you're not familiar.

Truth be told, I didn't really know how to approach writing about Jorge Posada's retirement, which, while not officially announced by Jorge himself, can be assumed to be impending after legit Yankee sources like Sweeny Murti and Buster Olney first reported the story this weekend.  Jorge was never one of my favorite players as I grew up and became a real baseball fan, even as he proved time and time again to be one of the most valuable members of the dynasty that started in the late 90s.  Even within the Core Four, Jorge ranks 4th in my hierarchy, well behind Andy Pettitte at 3.  In fact, I had grown to dislike Jorge over the past couple seasons as he became more of a detriment than a strength behind the plate and devolved to a platoon-type, left-handed only hitter at the plate.

I was especially critical of Jorge this past season when he threw his temper tantrum and took himself out of the lineup against the Fraud Sawx after Joe batted him 9th, disgusted that he could let his personal pride get in the way of his duty as a teammate and professional.  But in looking back at Jorge's career, it is that pride and attitude that I think carried him to the success he had as a player, and it is that pride and attitude that will define his career, for the better, as a great baseball player and a great Yankee.  He was never the biggest, strongest, fastest, tooliest, anything-iest player on the field, and yet he got so much out of what he did have and brought so much more to the table because of what he had inside.  That, more than anything, is the mark of a truly great player and the defining characteristic of Jorge's career.

In looking back at his career and trying to define his greatness, the first question that will come up is whether or not Jorge is worthy of making the Hall of Fame.  His standard stat line paints a very strong picture: .273/.374/.474, .848 OPS, .366 wOBA, 275 HR, 1,065 RBI, 47.6 fWAR.  You throw in the 5 ASG selections, 5 Silver Slugger Awards, and 4 World Series rings and Jorge's case becomes even stronger.  He ranks top 10 all time amongst catchers in doubles (7th), HR (8th), and XBH (9th, and is 11th in RBI.  Coincidentally, he also holds the same spots in those categories in the all-time Yankee rankings, along with the 3rd-highest WAR for Yankee catchers behind only Bill Dickey and Yogi Berra and the 8th most Games Player in franchise history.

Where the issue becomes cloudy is in the comparisons.  Putting Jorge up against the greatest catchers of all time and his numbers don't appear as sparkling (12th out of the top 12 in terms of WAR for players who played at least 50% of their games at catcher).  This is likely due to Jorge's negative defensive ratings, which hurts his candidacy in that they show him as an average all-around catcher, but also could help in that him still ranking amongst the tops all time despite the poor D shows just how good his bat was.  But when compared to his contemporaries (all catchers who have debuted in the past 25 years), Posada ranks 3rd in total WAR, behind only Mike Piazza and Ivan Rodriguez, 2 surefire HOFers.  Furthering the contemporary argument is the fact that Jorge leads all catchers in hits, home runs, and RBI since 2000 and is the only catcher ever to ever hit over .330 with 20+ HR, 40+ 2B, and 90+ RBI in a single season.  However you look at it, Jorge is right on the edge of the HOF line.

But HOF or no HOF, there is no denying the value and strength that Jorge brought to the Yankees in his 17 years in pinstripes.  He was the vocal, fiery behind-the-scenes leader that balanced out the cool, calm, and collected public captain's role that Derek Jeter has played for so many years.  He was the first to stand up for teammates on the field, the first to talk to reporters off the field, and event though he looked like he was hauling a stainless steel refrigerator on his back when he ran, he was always hustling when he stepped between the chalk lines and took the field.  More than any other player, Jorge might define just what made that late-90s Yankee dynasty so special.  He worked hard, got the most out of his talent, never tried to do too much, and stepped up in the biggest moments when his teammates needed him to.  That's what people should remember Jorge by, and judging by the reaction he got all season long from the Yankee faithful, that's how he will be remembered.

If I had to pick, I would have to say my favorite Jorge moment was the game-tying double off of Pedro in Game 7 of the 2003 ALCS.  With everything surrounding that situation and the fact that he came through off a pitcher who absolutely owned him, that's a moment I will never forget as a Yankee fan.  The look of sheer joy and still lingering focus and intensity on his face as he turned around to celebrate with his teammates in the dugout is an everlasting image in any real Yankee fan's head, and probably the perfect image to capture just what Jorge was about as a baseball player. 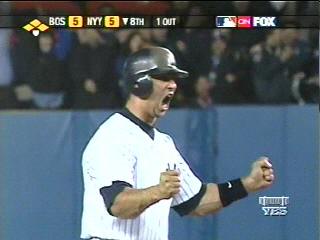 So even though he wasn't my favorite Yankee and never will be, and even though I admittedly soured on him over these last few seasons, I am going to miss Jorge Posada.  By whatever definition you want to use, he represented what being a "true Yankee" was all about, and it was fitting that he got to go out on his terms and on a personal high note this past postseason as one of the few Yankee hitters who actually performed well in the ALDS.  I'm glad he chose to go out on that note and to go out as a Yankee, and I'm looking forward to the day when his #20 is retired amongst the other great Yankee numbers where it belongs.

(Stats and rankings courtesy of Buster Olney at ESPN)
Posted by Unknown at 9:23 AM No comments: