Last night I had the good fortune of being able to tag along with the bigwigs of my company to an awards dinner.  I was only invited because I helped do some of the writing and video work for our submission package as part of the nomination process, but any chance to throw a suit and tie on, eat free food, and suck down free gin and tonics is a chance I'm not turning down.  It's rare that I get to feel important and I definitely lived it up last night.  Of course I'm following it up with a booze-hazed hangover today, because I'm a pussy and can't drink liquor, but it was definitely worth it since we came home with some hardware.  And now that I'm done talking about my 9-5 life, onto the links!

- On Tuesday, Matthew B of Yankees Fan Unite got an early start on 2012 offseason storylines by pondering who would be the ideal candidate to replace Swish in right field.

- It's been a consistent topic of conversation for the past couple of weeks, and Brien Jackson of IIATMS weighed in with his take on locking up Russell Martin long term.

- Anthony McCarron of the Daily News had a short profile piece on David Adams, who is still recovering from his 2010 ankle injury that put the kibosh on the Cliff Lee trade.  Adams has some real skill, so hopefully he can make it all the way back to form this year and keep himself on the prospect radar.

- On Wednesday, the always entertaining, and usually on point, el duque of It Is High... commented on the lack of potential Linsanity for the Yankees this season thanks to them stocking up on veterans to fill out the roster.  I especially liked the Brandon Laird name drop.

- Rebecca Glass of Pinstriped Bible had a nice piece on the true greatness of Mo.  With the quotes going around this week, it sounds like we all have to prepare to write something similar after this season.

- Mike Axisa of RAB discussed how the Yankees can adjust their strategy in the draft to be successful under the new CBA rules.

- On Thursday, Frank Campagnola of Pinstripe Alley practically gift wrapped this link for me by saying he wanted Phil Hughes to be the fifth starter and backing it up with some numbers.

- Fishjam25 of Yankees Fans Unite had an interview with left-handed pitching prospect Matt Tracy.  If you aren't familiar with Tracy, here's your chance to get up to speed on one of the better under-the-radar prospects in the Yankee farm.

- I shouldn't have to tell anybody this, but Chad at LoHud has the best day-to-day coverage of Spring Training activities and you should be following it and checking for updates at least twice a day.  Here's an example.

And from my TYA brethren, Matt Imbrogno reminds us all that the Yankee bullpen will not be a rudderless ship if Mo really does decide to hang 'em up after this season.  There's plenty of depth and plenty of talent left to get the job done.

For the Friday jam I'm going back into my wheelhouse with some Mastodon.  Musically that's an equivalent to a 2-0 fastball down the middle for me.  Enjoy. 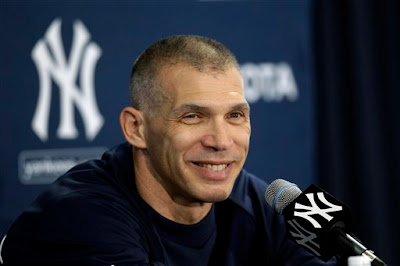 Quote via Chad at LoHud
Posted by Unknown at 10:52 AM No comments: