Well, Joba sucked again and pretty much all but guaranteed himself no shot at starting a game in the ALDS, if not the whole postseason.  But that being said, there was still plenty to be happy about tonight.

-Alfredo Aceves continued to show why he might be the most valuable pitcher in the bullpen not named Mariano Rivera.

-Jonathan Albaladejo looked strong in his 2 innings of work, making a case for himself to be included on the postseason roster is Dave Robertson gets bad news from Dr. Andrews.

-Brett Gardner looks completely healthy and doesn't seem to have missed a step despite being out for an extended period of time.  With him, Melky, and Swisher in the outfield late in games, there aren't going to be too many balls dropping in the gaps in the playoffs.

-A-Rod continues to be locked in at the plate.

-Jorge Posada continues to defy Father Time by coming off the bench cold to smack a game-winning homer.  (For my money he's the 2nd best offensive catcher in baseball behind Joe Mauer and probably the best when it comes to clutch at-bats)

-And last but not least, The Captain finally got of the schnide to lead the offensive charge tonight with 3 hits, tying Lou Gehrig for the franchise record.  A truly great moment in Yankee history that could have only been made better if Jorge failed to hit the home run and Jeter got a chance to come up in the bottom of the 9th with the game, and the all-time hits record, on the line.


If you call yourself a Yankee fan, and this image... 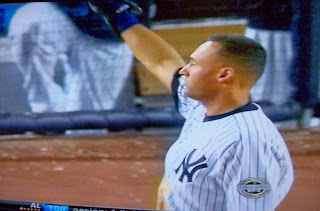 ...of Jeter saluting the crowd as they gave him a much-deserved standing ovation didn't give you goosebumps and/or make you choke up a little bit, then you aren't a REAL Yankee fan.
Posted by Unknown at 9:28 PM No comments:

You just lost the game for your team; the least you could do was groove one for Jeter and give the people what they came to see.
Posted by Unknown at 9:04 PM No comments: