It's All Pitching All The Time

At least that's what all the news is today in Yankeeland.  In case you've missed any of it, here's the latest rundown:

- Javy Vazquez had another solid outing last night and got just enough run support to get the win he deserved.  A little more run support here and there and the dude could have 12-13 wins right now.  Scary when you consider just how terrible he was in April.

- Joba has officially lost the 8th-inning setup role as Joe chose to let him sit on his ass in the 'pen last night when the 8th inning rolled around.

- That being said, Joe hasn't exactly committed to an official replacement.  D-Rob and Boone Logan combined to form the bridge to Mo last night and it sounds like Joe is going to play the matchup game until either somebody steps up or Joba regains his form in some lower-leverage innings.

- Apparently the Yankees "dangled" The Jesus for Joakim Soria.  I don't know if that means they offered up Montero as trade bait or if he flashed his dick at the entire Kansas City organization, but either way I don't like the sound of it.  Why are they so eager to give up their best hitting prospect in ages for 2-3-month rentals?

- Joe has announced that Dustin Moseley will start in Sergio Mitre's spot on Thursday.  I would have given Mitre another shot but you can't argue with the logic here.  Moseley's 4.2 scoreless innings certainly looked a lot better than Mitre's 4.1 of 7-run ball and actually gave the Yanks a chance to come back and win on Saturday.

- For some reason the Yanks are still showing interest in Ted Lilly as a possible band-aid to the Andy Pettitte situation.  Not exactly a vote of confidence for Moseley, but with Haren gone and Oswalt not looking likely, I guess they have to keep their options open.

- The Yanks and Sawx are in major competition for the services of Toronto lefty Scott Downs.  He's the best reliever available on the trade market ( lefties are just 10-54 against him this year) and with Marte on the DL he would be the ideal replacement as lefty specialist over Boone Logan.

- Ace is back with the team, throwing a bullpen session yesterday and getting some flat ground work in.  He said he thinks he is going to pitch again this year, which would be phenomenal news, but the Yanks have to be careful with his rehab since he re-injured the back earlier this year trying to come back.

- And last but not least, my boy Lenny has figured out what to do with Joba.  Major kudos to him for figuring out what we all couldn't.  Who knows?  Maybe Joe was already thinking that way too and that explains Joba not pitching last night.
Posted by Unknown at 1:06 PM No comments: 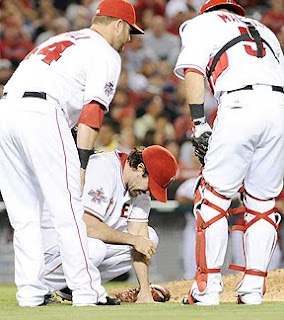 (Photo courtesy of Getty Images)
Were people really that riled up over the weekend about the Yankees trading for Dan Haren?  Dan Fucking Haren?  The guy is having the worst year of his career, has a spotty history against the AL East, and, as last night showed, clearly can't field his position to save his life.  And the Yankees were considering trading Joba, Ivan Nova, Z-Mac, AND Dellin Betances for this dude??  Give me a fucking break.

I know Mitre sucked over the weekend, but there's no reason to jump off a bridge and panic about the rotation.  The Yankees didn't need Dan Haren, and they don't need Roy Oswalt.  They can patch it together for a few weeks and hold the lead until Andy comes back.  At least he knows how to field a comebacker, it's just the throwing to first that gives him problems.

Get up, you candyass, and stop crying.  You got hit in the arm.  Pussy.
Posted by Unknown at 8:48 AM No comments: