You know it's getting close to prospect season when the end-of-year top prospect lists come out.  Today marked the first significant step in the beginning of that process as Baseball America unveiled its top 10 Yankee prospects for 2013.Without further ado, here it is:

My thoughts after the jump. 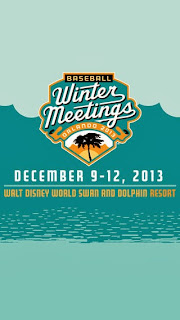 Monday Mid-Morning Food For Thought: Something To Like About Beltran

As with Ellsbury, I'm not fully on board with the Carlos Beltran signing yet.  I was against him at the start of the offseason when there were better, younger options available, less against him once the offseason started, and OK with signing him once Robinson Cano left for Seattle.  I hate the 3rd year of the deal, but I understand it as doing what it took to get a player who could help replace Cano's lost left-handed power.

And when it comes to replacing that lost power, Beltran should do just fine.  The spray chart below shows his BIP distribution from the left side of the plate last year.  You'll notice that the bulk of his power production comes from the left side of the plate and there are a fair amount of balls on the warning track that would have made it out of the short porch in Yankee Stadium.

They're not at all sexy, certainly not sexy enough to make major headlines during Winter Meetings week, but the Yankees are working on fortifying their bullpen depth with a few small Minor League deals.

It started early last week when Ken Davidoff reported that the team had signed righty Brian Gordon to a MiL deal, one that presumably includes an invitation to Spring Training.  If that name sounds familiar it's because Gordon was the man from nowhere who came up and pitched a few spot starts for the team in 2011.  He spent last year in the bullpen for Oakland's Triple-A affiliate and did a pretty good job.

There are also reports that the team is trying to re-sign Matt Daley, one of the recent 40-man casualties, to a MiL deal for next season.  Daley pitched well in limited September work for the big league club and was very good in 53+ MiL innings pitched in 2013.  Like Gordon, he would probably get an invite to ST to compete for a spot in next year's 'pen, although I imagine the Yanks look at both of these guys as Triple-A insurance depth more than realistic Major League options.

Posted by Unknown at 7:36 AM No comments: