2013 Storylines Review: All About Robinson Cano 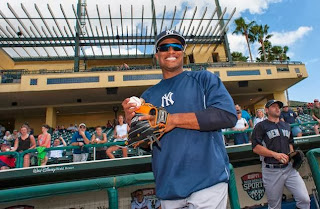 When you're a flashy, talented, good-looking middle infielder in his early 30s playing in New York, chances are you're going to be the man.  That's the makeup of Robinson Cano, and under a different set of circumstances he would probably be the king of New York.  Unfortunately for him, he's come up in the Yankee organization during the Core Four Era and he's always been somewhat overshadowed by those players and the other bigger names and bigger contracts that have been brought in.

All that started to change a few years ago when those bigger names started to hit their mid-30s decline and Cano started to be recognized for his true talent.  Over the past few seasons he's risen up to be recognized as the best second baseman in baseball and one of the best all-around players in the game, and that upward trend hit its peak this season as he entered the final year of his current contract.  Cano could be the key to the Yankees' future as they move away from the Core Four years, and as the top potential free agent on the market this coming offseason he finally forced his way into the spotlight.

We know that Vidal Nuno is going to pitch this offseason.  We know that Dellin Betances is not.  Via Chad Jennings, we now know the plans for a few more of the younger Yankee pitching prospects.  Unsurprisingly, the plans involve a lot of inactivity.

- Manny Banuelos will not be pitching this winter after throwing all season to work his arm back into shape after TJS.  The team wants him to rest this winter and be ready for spring camp.

- Michael Pineda will also not be pitching this winter.  I expect him to throw in some capacity to stay sharp and keep his arm strength up, but he won't be pitching in game action until next spring.

- Jose Ramirez, who turned some heads this year in ST, was pitching in an instructional league after an oblique strain ended his season in the Minors.  He's not expect to pitch in winter ball either.

- Ty Hensley was also pitching in an instructional league as he works his way back from 2 hip surgeries.  He won't do anything formal in the winter but he'll continue to throw and progress back from surgery to hopefully be ready for spring.

It's not a confidence booster to read about so many injured pitchers, but at least they're all healthy and working their way back.  Being ready for next season is the most important thing now.

Posted by Unknown at 8:43 AM No comments: