NEW YORK -- Alex Rodriguez looked at the award he just received from Babe Ruth's granddaughter with big eyes and a broad grin. It was as if he almost couldn't believe it was his.

And after he told fans at the dinner that "he'd stick to the script of 2009 and keep it very, very brief," he choked up, taking a long pause -- save for a nervous laugh -- to look down at the podium and smile awkwardly....

Rodriguez batted .365 with six home runs and 18 RBIs in 15 games in the postseason, quickly putting to rest his reputation for failing when it mattered most....


Awwww, it looks like our little boy has finally grown up. About time we got back to some Yankee business on the blog, huh?  After 6 seasons in the pinstripes, A-Rod's realization of what it means to be a Yankee has come full circle. It's not about racking up MVPs and Silver Sluggers Awards; it's about winning championships and being recognized for being great in the situations that help win those championships.

While I can't say I approve of A-Rod breaking the "There's No Crying In Baseball" rule, the fact that he was that emotional and that proud of getting the Postseason MVP award shows that the new approach he took to the game and his life last year wasn't just an act; he actually learned something valuable. The fact that he's promising to stick to that approach of "handle your business on the field; keep your mouth shut off of it" is a good sign for him and the Yankees as they head into 2010 picking up right where they left off in 2009.

Now that he's got a ring, an award that actually means something, and a clean bill of health under his belt, expect the A-Horse to come out of the gates harder than Secretariat this year. The rest of the AL better get ready to get out of the way or risk getting their teeth kicked in.  April 4 can't come fast enough. 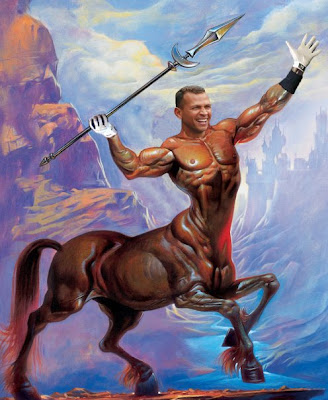