The Fraud Sawx Collapse Gets Deeper 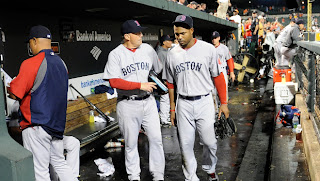 (Losing.  Courtesy of Getty Images)
I know it seems like I'm just hanging onto anything I can to cope with the fact that the Yankees' season is over, but honestly, how can you not be intrigued by all the shit surrounding the Bahhston Self Massacre??  It's hilarious and it's everywhere.  The coverage of the collapse rivals the coverage of the 2004 World Series victory.  It's insane.  Today, a huge story was published in the Globe with even more inside information on this clusterfuck of all clusterfucks.  Read the whole story when you get a chance because it's fascinating to see how disconnected everybody in the organization was from each other.  But if you don't have the time right now, here are the highlights:

- Terry Francona maybe was/maybe wasn't distracted this year by problems with his failing marriage and painkiller usage, which contributed to him losing control and influence over his players.

- There were thoughts amongst ownership that the players were tanking in September because they were bitter about a Saturday doubleheader scheduled to try to work around Hurricane Irene.

- As an attempt to end the perceived bitterness, ownership bought every player a pair of $300 headphones and invited them to a players-only party on John Henry's yacht on September 11.

- Josh Beckett, John Lackey, and Jon Lester spent the majority of the season re-enacting the majority of my college career by drinking beer, eating fried chicken, and playing videogames in the clubhouse during games.

- Ownership didn't support the Carl Crawford signing, and stated that they had no idea about how bad things had gotten in the clubhouse.

And to top it all off, Theo Epstein has reportedly agreed to a deal to become the new GM of the Cubs for 5 years and $20 million, which is more than he made last year as the Sawx' GM.  The guy is being rewarded for being the prime architect of this disaster and then jumping ship when it all came crashing down around him.  You just can't make this stuff up.

P.S.- Imagine how wacky shit would have been in NY if stuff like this was happening to the Yankees?  It'd be like "The Bronx Zoo" 2.0.
Posted by Unknown at 1:19 PM No comments:

(Used courtesy of TYA.  Sorry, no Bartolo)
The rotation preview post was done in 2 parts back in March: the "known" spots in the rotation and then the unknowns.  Looking back on it, it's almost funny to think that I considered A.J. Burnett and Phil Hughes part of the known group going in, as they were expected to be the #2 and #3 starters well the back end would be pieced together through a combination of Ivan Nova, Freddy Garcia, Bartolo Colon, and whatever group of Triple-A arms had to step up when Garcia and Colon got cut.  Obviously, things didn't work out that way, but surprisingly, that not working out turned out to be a good thing for the Yankees, as they got way more production from their unknowns than anybody could have anticipated, turning the team's biggest weakness at the start of the season into one of their season-long strengths.

For the year, the Yankee rotation was above average.  Nothing eye-popping, but certainly better than one would expect when the team got 51 combined starts from Garcia and Colon, only 14 from Phil Hughes (and an ineffective 14 at that), and 2 from somebody named Brien Gordon.  Their starters combined for a 4.03 ERA (14th in MLB) and a 3.97 FIP (16th) in 979.1 IP (14th).  They averaged 7.09 K/9 (10th), 2.88 B/9 (16th), and accumulated 16.7 WAR as a staff, good for 6th in baseball.  That WAR stat in particular stands out as the biggest sign of the Yankees' rotational success in 2011.  Their other peripheral numbers don't stand out amongst the competition, but they knew how to get outs when they needed them and generally always gave their team a chance to win the game.  And with an offense like the Yankees', that's not a bad strategy to go with.