Mind of McCarver: Inside the Empty Head of a Bitter Old Baseball Curmudgeon 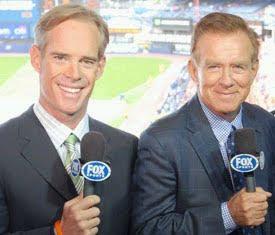 No fanbase of any team would be happy to have Tim McCarver doing color commentary for a playoff series; the guy is slow, clueless, and still seems to think the game is being played the way it was in the 1960s and 70s.  But when the Yankees are involved, McCarver takes his act to a completely different level, and the first 2 games of the ALCS have been chock full of Timmy's stubborn, blatant, anti-Yankee "analysis."

Exhibit A- Game 1: "There are managers who make people forget about the manager before him.  Joe Girardi is not one of them..."

Then why say it when you're talking about Girardi and the job he did this season???  Whether or not it was meant to be a slight, it was still a curious thing for Tim to bring up while he and Joe Buck were discussing how calm Girardi seemed in the pre-game press conference and how much more calm he seemed through the entire season compared to last year.

I don't think any Yankee fan will ever forget Joe Torre and the success he had with his Yankees during his tenure as manager, but there was always whisperings of his mismanagement of the bullpen and the fact that he played favorites with players like Jeter and Posada.  Those whisperings became louder towards the end of the Torre Era and an argument can be made that it contributed to the negative performance of the team over the last few years.

Girardi, on the other hand, has done a great job managing the pen throughout the season and especially in the playoffs so far.  He was known to be a bit of a general when he was managing the Marlins, but seems to have found a happy medium dealing with this collection of players.  There is certainly no sign of favoritism or any rifts in the clubhouse this season and the results have been everything fans have been hoping for.  So no, maybe he won't make people forget about Torre, but I would say Girardi has done a far better job of managing the personalities of this team than Torre did during his last few years and deserves a lot more credit for it than he's gotten.

Exhibit B- Game 1: "The catcher is almost always going to get that call, regardless of whether he's tagged or not."  Bottom of the 5th, referring to the play at the plate involving A-Rod where he appeared to never be tagged out by catcher Jeff Mathis.

This was the first of his trio of insanely illogical viewpoints on questionable calls of close plays.  Even in the face of multiple angle replays showing that A-Rod was not tagged with the glove holding the ball as he touched the plate, McCarver was steadfast in his belief that tagging the runner out was not necessary on plays at the plate, and focused solely on the fact that A-Rod should have been tied and quartered for running through the third base coach's stop sign.

If that's the case, Tim, then why do teams bother to throw the relay home to the catcher and why does he make an effort to catch the ball before tagging the runner?  Why not just throw the ball wherever you please and just let the catcher block the plate as the runner comes at him?  It's because the rules clearly state that the runner has to be TAGGED to be called out, and if he is not then he should be ruled safe.  There's no doubt that were the teams reversed in that situation, McCarver would have been up in arms about the umpire missing the call and being out of position, but since it involved the Yankees, the team that dismissed him as an announcer after 2001, being on the wrong end of the call, Timmy just chalks it up as a typical play that occurs as frequently in baseball as the home run or the groundout.

Exhibit C- Game 1: "It's off the bag....  But was it on long enough after the catch was made?" Top of the 6th, referring to Mark Teixeira's foot being off the bag when he caught CC Sabathia's throw to get Torii Hunter out on a bunt attempt.

Once again plain factual visual confirmation was thrown to the wayside to allow McCarver to hold on to his own misguided, bitter opinion that the Yankees got the benefit of a bad call.  Multiple replays showed Teixeira's foot to be on the bag as the ball was in his glove for more than a split second before it came off while Hunter had yet to reach the base, but McCarver refused to acknowledge it, leaving it up to question while repeatedly stating he believed Teix's foot was off the base.

Tim then stepped it up a notch by suggesting the first base umpire should consider that Torii Hunter's reaction was evidence that he was safe because he "had the best view of the play, and he was sure he was safe."  WHHAAAAAAAAAAAAAAAAAAAAAAAAAAAT????!!!!  You mean the player who had more to gain on the play than the umpire should be the most trusted authority on the ruling of a close play?  You're kidding, right Tim?  If that's the reasoning you're going to use, then why don't we just believe every player who says it was tainted supplements or B-12 shots when they get caught for using PEDs, or just let the players call their own balls and strikes at the plate?

Torii Hunter did not have the best view of the play.  He's moving at a fast rate of speed, trying to beat a throw to the base.  He doesn't have the time or the focus to check the positioning of Teixeira's foot at the exact moment the ball enters his glove.  The umpire does because that's what he is supposed to be watching on a play at first base.  If the ump is in good position, which he was, then he certainly has a much better view of the play than Torii Hunter.  Once again, if this play is reversed and Robinson Cano gets thrown out at first, McCarver would have talked himself hoarse praising Lackey for a great play and Morales for a great stretch at first.  Instead, the great plays of CC and Teix get ignored because the ump made what McCarver thought was the wrong call.  Whatever it takes to steal praise from the Yankees.

McCarver was at his best here, switching from saying Aybar did touch the base to Aybar didn't touch the base to Aybar hadn't been touching the base all night to players never touch 2nd base to umpires make that call all the time without players touching 2nd base to this game will go down as the most disputed game in professional sports history because of that call.  It was hard to tell who was more upset by the call, Aybar or McCarver.

All the while, the folks at FOX were once again providing multiple-angle replays of the play that show Aybar clearly never coming anywhere near second base on the play.  Not only that, they dug up replays of the previous plays he had made at 2nd base on the other 3 double plays turned by the Angels that night showing that he clearly DID touch 2nd base on all 3 of them. 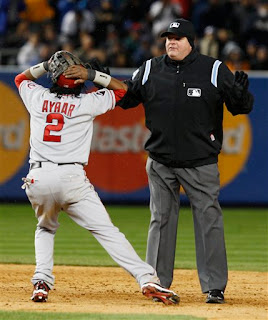 When confronted with this indisputable evidence, McCarver did acknowledge that Aybar touched the base the previous times and did not touch it the 4th time, he still would not admit that the correct call was made.  Instead he argued that umpires should not make that call and typically call the runner out even if there is no contact with 2nd base to avoid getting players hurt.  Whether or not that's the case, the fact is a correct call was made and in McCarver's eyes, the umpire was in the wrong for making that call as opposed to allowing Aybar's clear-as-day miscue to go on the wayside.

In McCarver's world, it's not a matter of right and wrong, it's a matter of what he believes is typically done and whether or not the team he's rooting for benefits from or is hurt by that unbalance in typicality.  Using McCarver's logic, if you get pulled over for going 75 in a 55MPH zone on the highway, you're not in the wrong for breaking the law and driving over the speed limit, but rather the cop is in the wrong for not ignoring what you typically do in driving that speed in that section of the highway.  The million times of it being wrong are more important than the one instance of something being right.  That was the case last night, and it was magnified by the fact that the Yankees benefited from the correct call and not the Angels.

McCarver has made it perfectly obvious that he is rooting for the Angels and will continue to spin his commentary towards them as this series goes on.  The sad thing is that FOX continues to put him on the air.  Sure Joe Buck is not psyched to have to call the Yankees but he's at least putting his pro-Boston rhetoric on hold to attempt to call the game as unbiased-ly as possible.  But McCarver is a flat-out fucking joke.  He cries when the right call is made that helps the Yankees and makes no mention of a wrong call being made when the Yankees are on the wrong side of it.  Michael Kay and David Cone would call this series more straight than McCarver.  The only question that remains is just how much lower will Timmy sink as this series goes on?  That in itself is a great reason to tune into Game 3 tomorrow.
Posted by Unknown at 8:02 PM No comments:

Forget A-Rod. How About A-God? 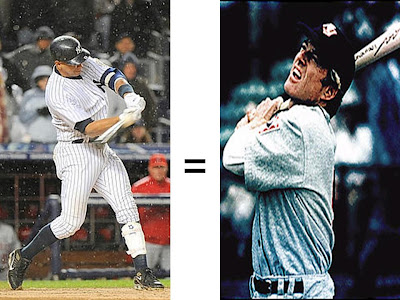 It's starting to get ri-goddamn-diculous, ain't it?  Even the rain drops stop falling just so they can catch a glimpse of A-Rod's at-bats.  Simply amazing.

The Angels would be better off just not showing up at the stadium tomorrow afternoon.  They've already proven that they can't play worth a shit in the cold weather but the Yankees have no problem playing in warm weather.  This series is fucking over.

Posted by Unknown at 2:14 PM No comments: