- As I touched on in my C-Grand post below, the Yankees are open to trade talks involving both Curtis Granderson and Phil Hughes, according to multiple reports.  Would have to be a part of a deal to bring back a big-name player to come close to matching value.

- Jack Curry reported that the Yankees talked to Kevin Youkilis' agent and that Youkilis is willing to take a 1-year deal if the money was right.  He was the first of many third basemen the Yankees were connected to today.  I wonder why...

- Ken Rosenthal loosely connected the Yanks to Marco Scutaro, who will surely be outside their spending limit if Buster Olney's report of a 3-year/$8 mil per price range for Scutaro are accurate.

- Jeff Passan had the Yankees at the "very strong" interest level for Jeff Keppinger.  His reported price range is 2 years/$4 mil per according to Ken Rosenthal, and more than that according to Heyman, which isn't super expensive but also more than the Yanks probably want to pay for a fill-in.

- Ken Davidoff reported that the Yankees have met with the agent for Eric Chavez and expressed their interest in bringing him back for another year.  Return of the third base platoon!

- He wasn't a necessity after the Kuroda/Pettitte re-signings, but the Yankees lost out on Dan Haren today when he signed a 1-year/$13 million deal with the Nationals.  Nice little offseason the Nats are having.

- They were only loosely connected to him, but the Yanks also lost Shane Victorino as a potential RF option when he signed a 3-year/$39 million deal with the Fraud Sawx.  That seems like an overpay to me.

- Dan Barbarisi reported Cash's confirmation that the Yanks have "had talks" with A.J. Pierzynski.  Guh.

- A little bit of good news on the A-Rod injury front- According to Ken Rosenthal, the Yankees have insurance on most of Rodriguez's contract, possibly north of 70% of it, that they could collect if this latest injury results in A-Rod being unable to continue playing.  That scenario is unlikely, but at least the Yankees would get a little kickback to reinvest if that contract ends up being that much more of a stinker.
Posted by Unknown at 7:01 PM No comments:

Trade Curtis Granderson, Do It

It's mostly just speculation and loose connections to various players this morning in Yankeeland.  But there was some dust stirred up earlier when Buster Olney tweeted that the Yankees were "open to talks" about trading Curtis Granderson.  I already made my pitch for what I would do with Granderson if the situation was different this offseason, but even with the payroll constraints on this is a move I would support if there's some body to the rumor.

Yes, trading Granderson away would open up another hole in the everyday lineup next season, one that would not be easily filled.  If the Yankees still want to contend next season, as Joel Sherman said they did when discussing the C-Grand rumors, ridding themselves of the best power hitter in their lineup doesn't help that cause.  But let's look objectively at Granderson.  He's 31 years old, he'll be 32 before the start of next season, and despite his high HR totals he appears to be in the early stages of decline.  His contact skills have steadily eroded since joining the Yankees, he set new career highs in total strikeouts and K rate in 2012, and most defensive metrics paint him as a below-average defensive center fielder at best.

His price tag is already $15 million for 2013, and that value will more than likely increase when he becomes a free agent on the strength of his HR numbers.  That will be too rich for the Yankees' blood if this offseason is any indication of how serious they are about getting below the luxury tax threshold.  If Granderson really is starting to decline and isn't a candidate to be brought back anyway, why not move him while you can still get something of value back for him?  It won't be value that will replace his production, but it's better than nothing.  I was a little more on-the-fence about this when I wrote about it months back, but now I'm going to say it more definitively.  The Yankees should trade Curtis Granderson.
Posted by Unknown at 12:29 PM No comments: 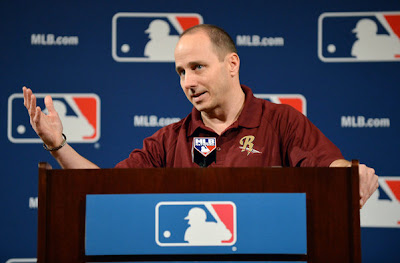 So yeah, it's not like the Yankees have done a terrible job this offseason by any means.  They have a plan and they're sticking to it.  It's that plan that I think frustrates people the most, though, and I know it frustrates me.  To see the Yankees willingly staying away from the best possible players that fit their needs because of money is still strange, and still not something I want to see happening.  And to be quite honest, if I have to hear the words "interested," "connected," or "preliminary discussions" to describe the Yankees' connection to some older position player, I'm going to scream.  So to change things up a bit, I'd like to come up with an offseason plan that's a little more exciting, the plan that I would be following right now if I were calling the shots and didn't have to worry about cutting payroll.  It basically boils down to 3 steps.
Read more »
Posted by Unknown at 9:00 AM No comments: