And Now For A Little Musical Number...

It's not like I need a reason to post the video for the new Deftones song on this blog. After all, it is my fucking blog. But just to keep with the Yankee theme, it is worth mentioning that Sergio Vega is wearing a Yankee hat in this video.  Enjoy.

Posted by Unknown at 6:27 PM No comments:

Does Somebody Else Actually Have A Shot At The 5th Spot In The Rotation?

It's still early in Spring Training, but so far the Joba-Hughes battle for the last spot in the rotation has been greatly overshadowed by the performances of Sergio Mitre and Alfredo Aceves. In their first 2 outings they have both looked impressive, and it raises the question of how serious are the Yankees about the race for the 5th rotation spot actually being an "open competition?"

Everybody from Joe Girardi to Brian Cashman has sworn up and down that this is a legit 5-man race between Joba, Phil, Mitre, Ace, and Chad Gaudin for the 5-spot in the rotation, but everybody with half a clue assumes it is going to come down to Joba and Hughes and everybody else will be herded into the bullpen or the minors.  The question that needs to be asked is, if Joba and Hughes don't perform well enough to prove they should win the spot, or if Mitre or Aceves continue to pitch lights out, will the Yankees keep true to their word and give the guy who pitched the best his shot?

I personally don't see it happening.  The organization has spent so much time over the last couple seasons grooming Joba and Phil to be starters that it would be seen as a waste internally if one of these guys isn't in the rotation this year.  At that point you can pretty much say the Joba Rules and Joba's entire 2009 season were a waste of time, and nobody in the higher branches of the Yankee tree likes to admit they were wrong.  Even if Joba or Hughes don't pitch that well for the rest of the spring, whoever does pitch better will be given the spot and it will be their spot to lose.

On the other hand, as blog after blog has pointed out, you don't need a world beater as your 5th starter, and nobody is accusing Mitre or Ace of being world beaters.  If they continue to pitch well and earn the 5th spot, I would feel just as comfortable with Mitre or Ace in the 5-spot and a bullpen of Gaudin, Park, Robertson, Marte, Hughes, Joba, and Mo.  It would be like a modern day version of the Cincinnati Reds' Nasty Boys 'pens of 1990 and would allow Joe the depth to cover for weak performances from the 5th starter or anybody in the rotation and keep Mo fresh for the stretch run of the playoffs.  Any way you look at it, it's a win-win and something to consider.

It's still way too early to speculate, and if Hughes or Joba shows even a hint of being able to nail down the last spot, it's going to go to them no questions asked.  But you have to admit that with the way things have started out with Joba and Phil not being overly sharp and Mitre and Aceves looking dynamic, this "battle" for the last rotation spot is certainly more interesting than it initially looked like it was going to be.
Posted by Unknown at 5:53 PM No comments:

People Let Me Tell You 'Bout My Best Friend 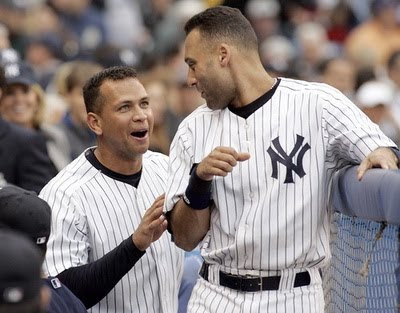 In today's Post, Kevin Kernan delivers a heart-warming tale of two long lost friends, reunited after years of a chilly stalemate between them. An excerpt from what will inevitably become an Academy Award-nominated screenplay:

"The bond of winning a championship together has created a tighter bond between Alex Rodriguez and Derek Jeter.

They drove here together yesterday from Tampa for the Yankees' split-squad 6-0 win over the Pirates. And they left together. Before the game they played catch and long toss together, ran together in the outfield and even walked into the clubhouse together along the right-field line at 12:01 after they were done with their early work while a group of Yankees were still taking batting practice.

They are laughing and joking together more, and during Sunday's workout in Tampa they spent a lot of time talking in short leftfield on a back field. They are enjoying being teammates." (courtesy of the NY Post)

Kernan thankfully left out the part where Jeter and A-Rod trade Lunchables lunches in the locker room after games, stay up late and watch scary movies together in a pillow fort they made together, and put Carl Pavano cards in their bike spokes to make them sound cooler when they ride around the Spring Training complex.

In all seriousness, this is good news for the Yankees and their fans. The Jeter-A-Rod rift was always news from the time A-Rod arrived in New York all the way through last year. It was a constant running subplot that everybody in the media knew about and everybody in the locker room had to be prepared to be asked about if anything regarding their relationship came up, like a lingering black rain cloud always hanging over the team and threatening to downpour on any good clubhouse vibes.

Jeter and The Horse are both professionals and their situation obviously didn't affect the way they performed on the field, but off the field one would imagine it still wasn't something they wanted to talk about. The fact that they seem to be back on good terms is good news for them and the team. It lifts that ominous cloud and allows for that little extra bit of comfort and calmness in the locker room now that everybody knows they don't have to worry about being asked "What's the deal with Jeet and A-Rod?" Jeter and A-Rod both can now focus even more on playing well and winning games and not have to listen to discussions about who is better, who is the leader, whose feelings are hurt, etc.

While it is a little hokey that something like this warrants major coverage in The Post, the fact is it's still good news for the team as they move into 2010. Having 2 of your best players and clubhouse leaders on the same page and getting along sets the tone for the relaxed, fun clubhouse vibe that was so important to last year's success and ensures that those vibes continue this season.
Posted by Unknown at 11:27 AM No comments: