The ashes of the injury-plagued 2012 Minor League season are all but cleaned up after the latest updates on Mason Williams and Jose Campos.  Mark Newman confirmed to George King of Baseball America that Campos has completed his offseason rehab and will be ready to start a regular Spring Training with no restrictions, and earlier today multiple beat writers reported that Williams is close to 100% physically and expects to start full ST activities in a few weeks.

Both Williams and Campos were noticeably absent from the list of non-roster invitees to big league camp last week, and their status as top organizational prospects makes their omissions easily understandable. Campos could end up being the only chance the Yankees have to take something positive from the Montero-Pineda trade if Pineda doesn't come back strong from his labrum surgery, and they just put ManBan on the shelf for 2013 after shutting him down because of elbow problems similar to Campos'.  Williams projects as the center fielder of the future and had his 2012 end prematurely because of shoulder surgery, something the Yankees have seen be a constant problem for fellow CF prospect Slade Heathcott.

The future potential of both guys, as Yankees or as trade bait, depends on them being 100% physically, so there was no need to rush them back.  The most important thing is that they are fully healthy and ready to start the season, and that sounds like it's going to be the case.
Posted by Unknown at 12:50 PM No comments: 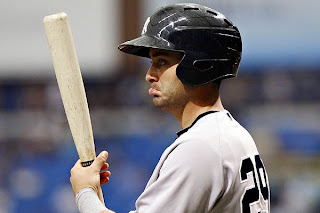 (Now I know why the batting helmet was so big.  Courtesy of Kim Klement/US Presswire)

It didn't create the media waves that Alex Rodriguez's connection did, but the Yankees continued to stay closely tied to the investigation of Anthony Bosch and his Miami-based Biogenesis clinic when a new report surfaced yesterday that included Francisco Cervelli's name.  Jeff Passan and Tim Brown of Yahoo! Sports had the full story, which also included recent former MVP and test beater Ryan Braun, and while Cervelli's name was not listed next to any wording outlining specific PEDs, this has to be a concern for the Yankees with how seriously MLB has been taking their investigation into the clinic.

From a strictly Yankee-centric standpoint, this could actually work to their benefit.  They've stood pat at the catcher position all offseason, willing to punt and sacrifice some defense and a lot of offense to save a buck.  If MLB digs deeper on Cervelli and finds something substantial that would be grounds for a suspension, suddenly the Yankees are back down to one catcher.  They seem pretty set on starting Austin Romine in Triple-A this year, so while it might not be under the best circumstances, this situation could give them a reason to go out and seek an upgrade at catcher.

Looking at the bigger picture, this latest news and the stuff we already know about this situation is starting to add up to create the appearance that PEDs are still deeply ingrained in the game of baseball.  For all the time MLB spent patting itself on the back when it first administered its new testing and punishment procedures, they are still woefully behind the times when it comes to testing, particularly for HGH, and players have found a way to beat the system.  Nothing has been proven beyond a reasonable doubt and nobody has been punished yet, but when the names connected to this case include upper-tier players and all-time greats like Braun and A-Rod, emerging stars like Gio Gonzalez and Melky Cabrera, and nobodies like Cesar Carrillo and Cervelli, that's a good indicator that PEDs are still a league-wide problem.

To his credit, Cervelli did make a statement admitting to consulting the Biogenesis clinic after his foot injury in 2011 and purchasing supplements that he said he was certain did not contain banned substances.  Unlike A-Rod, he has no past PED connections and has earned the benefit of the doubt.  As with A-Rod, all we can do is wait and see what comes as a result of this new report.
Posted by Unknown at 7:15 AM No comments: