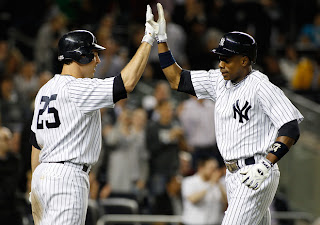 I'll be doing the season review posts in the same format as the season previews.  If you missed the lineup preview, or want an opportunity to refresh yourself on my takes and laugh at some of the stupid shit I said back in March, the 2011 Lineup Preview can be found here.

Heading into the season, the lineup was one of the few things we could all be confident in, and with good reason.  There were All Stars, MVPs, and Gold Glove/Silver Slugger Award winners littered throughout the 1-9 spots and there was no reason to think that the Yankee lineup wouldn't be one of the best, if not the best, in baseball.  And to everyone's credit, the Yankees as a team were arguably the best all-around lineup in baseball in 2011.  They finished near the top of heap in traditional stats (1st in HR, 2nd in R, 2nd in RBI, 2nd in OBP, 4th in SB) as well as in the newer sabermetric categories that paint a more accurate picture of offensive strength (3rd in wOBA, 2nd in wRC+, 1st in BB%).  They had power, patience, and speed, not a bad combination if you're looking to score runs in the American League.  And as a compliment to that, the Yankees managed to play solid defense, finishing with the 7th-best team Fld % in baseball.

Surprisingly, though, the Yankees managed to stay at the top of baseball in a year where they experienced down years from some of their biggest offensive contributors.  Here's what I had to say in my preview post about Teix... :

"I believe the opportunity is there for him to have a big year and re-establish himself as the best first baseman in MLB not named Pujols."

"A-Rod has never looked better in Spring Training than he has this year, physically or at the plate, but it remains to be seen if he can translate the offseason workout regimen to a full healthy season of A-rodian production."
Read more »
Posted by Unknown at 1:26 PM No comments:

The end of the season is bringing out some good stuff from the best in the biz.  Let's take a hot lap around the Yankosphere.

- It's never too early to start heating the stove up, and Jon Heyman does just that with this tweet making the Yanks out to be the early favorites for C.J. Wilson.  I'll withhold my comments on Wilson for now.

- This was from Sunday's NY Post, but it's Joel Sherman stating what he thinks the Yankees' offseason needs are.  I can get on board with the "more lefties" theory, but Beltran for 3 years at 40-something mil instead of Swish for 1 at 10 and change?  No thanks.

- William at The Captain's Blog with a little dose of reality/perspective  for the crowd still booing A-Rod for making the last out of the ALDS.  Newsflash, it's happened before, people.

- Vizzini at NoMaas takes a similar stance in response to the Sherman piece, reminding everyone that immediately wanting to change up the roster is stupid.  Check out the entire series of "ALDS Thoughts" at NoMaas.  Always good stuff coming from those guys.

- I'm just going to link straight to the LoHud homepage so you can peruse through their "Moving Forward" series on your own.  Expect to see the earliest hot stove news coming from there soon.

- Brien at IIATMS seems to agree with me that Joe was horrible in the ALDS.  Well, at least that makes 2 of us who think so.

- Buster Olney at The Worldwide Leader had some early details on the contract talks between the team and Cash, and early indications are that things are moving ahead nicely.

- Lord Duggan at Pinstripe Alley uses the CC situation to point out the flaws in inking big FA pitching contracts.  There's something all Yankee fans should be familiar with.

- Steve S. at TYA breaks down the whole Swish situation, painting a pretty convincing picture for why he needs to be the RF in 2012.

- Speaking out painting pictures, Joe Paw at RAB does just that in this piece about what the Yankees should/shouldn't do with Jesus Montero.  There really isn't anything more to say about that story after reading Joe's post.  If it ain't for King Felix, then there's no reason to even think about trading The Jesus. 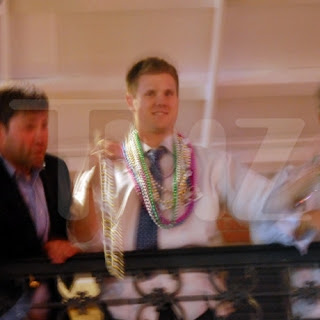 (Courtesy of TMZ.  Obviously)
That's what I want from one of my clubhouse leaders right there.  Showing his teammates that there's a time to sulk and feel bad about suffering the worst September collapse in baseball history, and when that time is over you have to pick yourself up, put yourself back together, and get back to training to get ready to come back stronger and better in 2012.  Put the collapse behind you and use it as motivation to better yourself as a player moving forward.