To hell with mentally checking out, I didn't even bother checking in today.  Still trying to get all my hearing back after the Lo-Pan show in Milwaukee last night and took the whole day off today for a March Madness/day drinking marathon.  If you're stuck at work, you have my condolences.  #ThoughtsandPrayers.  Not really though.  Now onto the links!

- On Monday, Jesse Schindler of Pinstripe Alley broke down the backup depth at second base, a position that's probably going to need a lot of backup help this season.

- On Tuesday, Mike Axisa of RAB previewed the defensive areas of weakness for 2014.  There's the ones you knew about and 1 or 2 you might not have thought about.

- Michael Eder of IIATMS/TYA made another case for why Stephen Drew could end up a Yankee before the start of the season.

- On Wednesday, el duque of It Is High..., in a rare display of optimism, spoke highly of the Yankees' current abundance of quality starting pitching depth.  Hard to disagree with the guy.

- William Juliano of The Captain's Blog proposed a very interesting idea for the bullpen strategy should the Yankees elect to take all 4 of the 5th starter competitors with them on the Opening Day roster.

- Vizzini of NoMaas offered up his win total prediction for 2014 and rationale for the number.

- Billy Brost of Yanks Go Yard mused on the decision Joe faces with Jeter's spot in the batting order.

- On Thursday, Daniel Burch of The Greedy Pinstripes looked at what statistical milestones could have been in reach for A-Rod were he allowed to play this season.

- Chad Jennings of LoHud got Mick Kelleher's thoughts on each of his projected starting infielders.

This week's jam is a little taste of live Lo-Pan from a show they did last July.  Absolutely killer set last night and really cool dudes to talk to afterwards.  If you like good hard rock and roll and beards, definitely check these guys out. 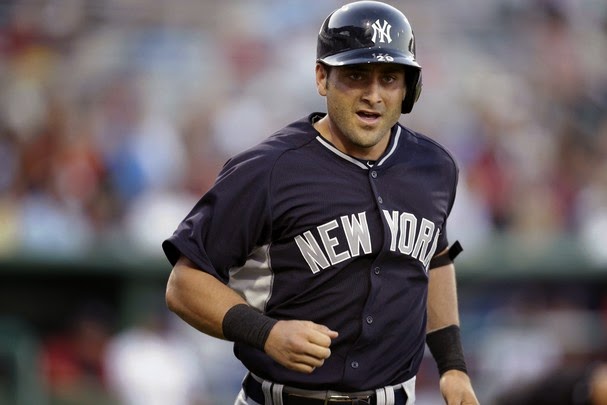 It was only 2 days ago the Yanks played mostly their A-team against the Boston B-squad.  The roles were reversed last night at The George but the results stayed the same as the Bombers won 3-2.

- David Phelps put up a solid showing as he tries to keep up with Michael Pineda in the 5th starter race.  He went 6 innings and gave up 2 runs on 4 hits and 2 walks while striking out 3.  Francisco Cervelli smacked his 4th HR of the spring.

- Little injury scare earlier in the morning when Jacoby Ellsbury was scratched from BP.  Turned out the team wanted him to take a precautionary MRI and it came back negative, so he's still on to return in a few days.

- Bigger injury scare before the game when Brendan Ryan was scratched with "upper back spasms".  Team said it's not related to his lower back problems.  Yeah sure.

- Joe indicated that a decision could be made on the 5th starter this weekend.  Have to think it's going to be Pineda.

Posted by Unknown at 7:41 AM No comments: