And it's totally embarrassing that you have to bring up your own petty bullshit AGAIN during a team when your team is trying to climb back into the playoff and division races.  When are all your asshole loser teammates and dickhead upper management going to realize that YOU are more important than THE TEAM and WINNING???  The mid-point of the season is the PERFECT time for them to give you your due consideration.  A-fucking-men, bro!
Read more »
Posted by Unknown at 3:36 PM No comments:

It's been extremely hot out here in Wisco this entire week.  There was a heat advisory put into effect on Tuesday and it doesn't end until 10PM tonight.  That's heat, people.  And it's been miserable to be outside in it.  I do not envy the shop guys at my company who have been subjected to this hot torture for the last 3 days.  The level of discomfort associated with swesticles and swass in 100+ degrees of heat and humidity cannot be understated, and my heart goes out to them (from the comfort of my ergonomic desk chair safely tucked inside the air-conditioned office.  We were playing bags at my buddy's place on the 4th and within 10 minutes of being outside, I could no longer drink my bottle of Magic Hat because the lip of the glass was too damn hot.  When the heat physically prevents me from consuming my alcoholic beverages, that's where I draw the line.  Stupid summer.  Now onto the links!

- On Monday, William Tasker of IIATMS debugged the "Yankee Stadium advantage" theme that continues to pervade any kind of MSM talk about the team with H/R split statistical support.

- On Tuesday, William Juliano of The Captain's Blog examined the Yankees' season-long offensive numbers to remind us, and possibly them, that looking for an offensive upgrade at the trade deadline might not be a bad idea.

- Matt Keegan of Pinstripe Alley made a case for why the Yankees should open up a roster spot and call up Ronnier Mustelier.

- On Wednesday, the crew at Bleeding Yankee Blue had a very interesting interview with Dave Goode, a 30-year Yankee Stadium veteran as a vendor.  Lotta cool stuff in there.

- Mike Axisa of RAB, in preparation for the upcoming trade deadline, broke down the Yankees' organizational strengths and weaknesses as they relate to trade pieces.

- Mike Eder of TYA highlighted the change in Freddy Garcia's approach with PITCHf/x to show how he made a successful return to the rotation against Tampa earlier this week.

- On Thursday, Lenny Neslin of lenNY's Yankees weighed in on Big Sloppi's recent idiotic comments about his contract and the effect it could be having on the Fraud Sawx's clubhouse.

- Mark Feinsand of The Daily News got some very candid and honest comments from Reggie Jackson on steroid users, including a couple of current Yankees.

- Jimmy Kraft of Yanks Go Yard took a look at how the Yankees have fared against other teams' aces so far this season.

- Chad Jennings of LoHud looked at how the 2010 Yankee draft class has done in their first 2 years.  I'm almost ashamed to admit that I didn't realize how many current prospects came from that class.

- Fishjam25 of Yankees Fans Unite commented on the horrible state of the Yankees' catching right now, and threw some ideas out for possible solutions.

- David Waldstein of the NY Times had an incredible piece on Hiroki Kuroda and the tortorous hardships he had to endure coming up as a young player in Japan.  It's fascinating and frightening at the same time.  A definite must-read.

- EJ Fagan of TYA took a brutally honest approach to evaluating the Yankee farm system's 2012 season in light of 3 of their guys making BA's midseason Top 50.  Based strictly on results, it's hard to argue with EJ's points.

- On Friday, SG of RLYW broke out the postseason probabilities and the possible implications of the 16 remaining Yanks-Sawx games relating to the Yankees' postseason and division title chances.

For the Friday Jam, we're going back to middle school days again with "Slow" by vaunted no-hit wonder Professional Murder Music.  I remember being stoked as hell when the "End of Days" soundtrack came out in 1999; just a murderer's row of Middle School Brad bands: Korn, Limp Bizkit, Powerman 5000, Rob Zombie, Eminem.  And then there was this little ditty right in the middle of everything.  It's actually a pretty catchy song.  Too bad these dudes never amounted to anything.

Big weekend series coming up.  Hope everybody has enough beer and chips to get them through it.  No live blog for Sunday night because I actually want to watch the whole game instead of missing half of it while I write.  Selfish, I know. 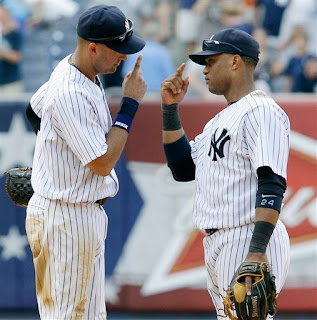