I don't know about everybody else, but I've been completely drained by this season.  I am literally (figuratively) sputtering to the finish line and I apologize if the quality of my writing or content has slacked in the past few weeks.  For a team that wasn't expected to seriously contend for a postseason spot and a season that played out about as we expected, it's been incredibly taxing and I'm going to be very glad when it's over so I can just kick back and watch the postseason games without having to stay up late or drag my ass out of bad early to write another depressing recap.  Now onto the links!

- On Monday, William Juliano of The Captain's Blog commented on the pending retirements of Mo and Andy and in what direction that might spur the organization going forward.

- EJ Fagan of IIATMS/TYA displayed an interesting graphical representation of the Yankee farm system's rapid decline in the last 3-5 years, or Exhibit B in the case of why the Yanks aren't built to contend on a budget.

- On Tuesday, SJK of NoMaas questioned many of the late season lineup decisions that Joe was sticking with after the team's postseason hopes were dashed.

- On Wednesday, Andrew Mearns of Pinstriped Bible ranked the top 5 moments of Andy Pettitte's career.  Hard to argue with number 1.

- Chad Jennings of LoHud had all the quotes from CC Sabathia on his tough 2013, what he thinks the problems were, and what he's already doing to start re-working things for next season.

- El duque of It Is High... used the Mo bobblehead disaster as a reason to recap the state of the Yankee organization since Hank and Hal took over.

- Alex Pugliese of Yanks Go Yard commented on the double standard for Andy Pettitte and Alex Rodriguez when it comes to PEDs.  A very fair point that too often gets passed over by the MSM.

- Mike Axisa of RAB analyzed the upcoming A-Rod suspension appeal and how each potential scenario would work in and against the Yankees' best interests.

- On Thursday, Clive Barker of The Greedy Pinstripes mused on Mo and Andy's retirement and the all but official end of the last great era of Yankee baseball that comes with it.

- SG of RLYW looked back at the history of Yankee 1st round draft picks and where Phil Hughes fits into that history now that his Yankee career is almost assuredly over.

- On Friday, Greg Corcoran of Bronx Baseball Daily weighed the pros and cons of this offseason's top 2 international FAs, Jose Abreu and Masahiro Tanaka, and how they could fit the Yankees' needs.

- Chris Mitchell of Pinstripe Pundits looked back on the never-ending rotation of warm bodies through the Yankee infield in 2013, and how bad the performance from the majority of that group was.

This week's jam is "Enter Sandman."  For obvious reasons.

Enjoy your weekends, everybody.
Posted by Unknown at 2:23 PM No comments:

Awesome.  Undeniably awesome and hands down the most memorable moment of the season. 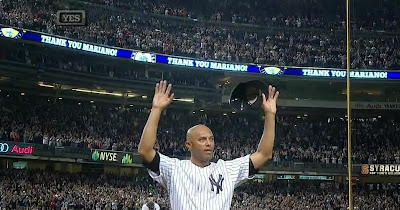 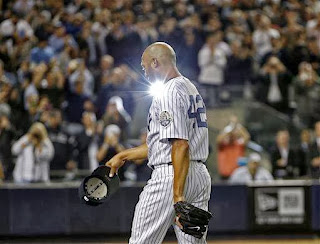