Awww, look at that. The Yankees let the old dude who got fired and claimed age discrimination back to the Stadium for the World Series. What a heart-warming moment; who said the Yankees were a heartless organization? 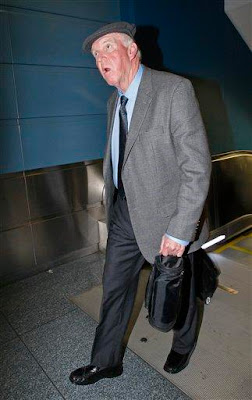 What's that you say? That's Charlie Manuel? The manager of the Phillies? Bullshit, that guy looks fucking older and more clueless than George, and with a bigger a dump in his pants.

That's REALLY the manager of the Phillies? The team that everybody and their mother thinks is going to give the Yankees all they can handle and maybe even beat in this series? BAHAHAHAHAHAHAHAHAHAHAHA!! That old bag of shit there looks like he needs to be in a wheelchair having green Jell-O spoon fed to him. Even Joe can't screw anything up from a managerial perspective when this corpse is the guy with whom he's going to be matching wits.

And to make matters worse for Philly fans, he's already showing how out of his mind he is by starting Pedro in Game 2. Somebody better tell Grandpa Charlie here that it isn't 1999 and he won't have Steve Carlton available out of the pen when Pedro gets lit the fuck up and they limp home down 2-0. Somebody get this guy a LifeAlert and a hospital bed, STAT!

This series is fucking over.  People might as well start clearing their schedules so they can get a good view in the Canyon of Heroes now.
Posted by Unknown at 11:24 AM No comments: