Justin Verlander Is The MVP? Really?

I don't get it.  I really don't.  Looking back at the way the voting went when Clemens won in 1986 and this year, it looks like both he and Verlander benefited from the same thing- a bunch of other position player candidates who all had similar great seasons without any one player distinguishing himself as head and shoulders above the others.  But if Pedro Martinez didn't win the MVP in 1999 with those numbers then there's no way you can convince me that Justin Verlander deserved the award in 2011 over guys like Bautista, Granderson, or Ellsbury.  And remember, this is a guy who hates the Fraud Sawx more than anything saying this.

The media jumped on the Verlander bandwagon late in the summer and basically hand delivered the award to him, and that's just sad.  Cy Young?  sure.  But more valuable than those everyday players and the seasons they had?  Not on your life.  MLB should just change to Most Popular Player Amongst The Media Award, or MPPATM, starting next season because that's really all it is now.

P.S.- Yes, I'm a grown man who just used a WWE clip of The Miz to express my disdain for the AL MVP Award voting.  Suck it.
Posted by Unknown at 5:27 PM No comments:

Darvish Posting Not A Sure Thing?

In an article for Yahoo! Sports, Jeff Passan discussed the latest in the Yu Darvish situation and shed some light on the workings of the posting system for Japanese players looking to join Major League teams, which I admittedly had no idea was such a thorn in the teams or players.  The piece suggests that Darvish being posted might not be the 100% certainty that everybody perceives it to be if he decides to stand up against the system.  Check out some of the quotes:

"Yu Darvish, in the words of a confidant, 'wants to change baseball in Japan.'”

“'I’m concerned we’re not going to see him for a few more years,' said another GM in a similar position. 'He’s not your average Japanese player. I get the impression he wants to stand for something.'”

"So whether it is speaking out about the posting system or coming out in such favor of staying that it would embarrass the financially troubled Fighters if they posted him anyway for the millions in revenue it would bring, Darvish does command a position of strength, publicly if not legally."

On the one hand, I would have to respect Darvish if he decided to take a stand against the current system and stay in the NPB League.  On the other hand, I would have to be pissed at Darvish for doing so because it would mean the Yankees have no chance to sign him this year.  I know I'll definitely be paying closer attention to this story over the next couple weeks now that there's a possibility of Darvish not being posted, and I'm sure the Yankees will be doing the same.

MVP Vote Could Be A Crapshoot Today 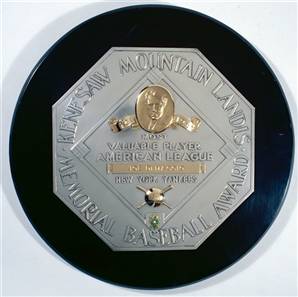 (Who wants it?)﻿
The AL MVP winner will be announced later today and the Yankees have 2 horses in the race in Curtis Granderson and Robbie Cano.  Towards the end of the regular season there was a lot of talk about who from the collection of top contenders would take home the award.  And between nobody really stepping up and distinguishing themselves during the season's final weeks and the quick transition to focusing on the playoffs, I feel like the MVP talk has fallen by the wayside this offseason.

The list of contenders this year is a deep one: the previously mentioned C-Grand and Cano from the Bombers, Adrian "God's Plan" Gonzalez and Jacoby Ellsbury from Fraud Sawx Nation, Justin Verlander and Miguel Cabrera from Detroit, and Jose Bautista from Toronto.  And all 7 guys have a real shot to win the award depending on how the votes go.  But who will rack up enough votes to take home the hardware?  And do Curtis and Robbie have a legit shot?

I'm not going to go through the numbers again because we all know them by now, but the short answer is yes, both guys should be considered real threats to win the award and Curtis could even end up stealing it.  But the big knock against both guys, besides the fact that the play for the Yankees, something that has already cost Nova and CC votes in their respective award races, is their negative defensive ratings in 2011.  Curtis' case has been talked about multiple times, and I still think his rating is a bit unfair thanks to the super human abilities of Brett Gardner in left, but voters likely won't consider that.  And Cano didn't have nearly the year in the field that he did in 2010, something that could force voters to look past his offensive numbers that were right on par with what he put up in 2010.  That, plus Curtis' low batting average, will stick out in some voters' minds and will likely be enough to cost both guys crucial points in the final tally.

The other interesting factor in play here today is the teammate factor.  There are 3 separate pairs of teammates amongst the group of top MVP contenders and that could work against all 6 of them if they end up splitting votes.  In the end I see that being enough to tip the scales in Jose Bautista's favor, even though I'm a firm believer that a player on a mediocre team should not be considered "most valuable."  So book Bautista for the award and another post tonight from me railing on the voters for not giving Curtis and Cano their due.