It's been a frustrating 3-game losing streak for the Yanks.  Their offense hasn't been able to get anything done, against big name familiar foes or no name first-timers, the rotation has been uneven, and the baby shit soft back end of the bullpen has been a killer when it's been called on.  The Yankees added a fresh arm to that back end in Al Aceves before the start of today's game, but I think they were hoping he wouldn't be needed to support Masahiro Tanaka.  Tanaka has been the ace through 5 starts and his team needed a big ace-like performance from him today.

- He wasn't looking very ace-like early.  He gave up a solo homer to Desmond Jennings in the top of the 1st, a second run on a trio of singles in the 2nd, and a third on a Wil Myers solo shot to lead off the 4th.

- The Yankee lineup didn't do much to help Tanaka against Tampa starter Jake Odorizzi the first time through.  He retired the first 9 in order with 3 strikeouts and it was shaping up to be another long day.

- Something funny happened after the Myers HR though.  Tanaka got it together and shut Tampa down while Odorizzi fell apart and let the Yankees take over.  It started with a Mark Teixeira 2-run shot in the bottom of the 4th to make it 3-2, his 4th HR in 5 games.

- It continued in the 5th with an Ichiro double, a Solarte walk, and an RBI ground-rule double by Jacoby Ellsbury.  That knocked Odorizzi out of the game and the re-energized Yanks beat up on the bullpen to the tune of 6 more runs in the next 3 innings.

- Once his team got on the board, it was like Tanaka had new life.  He gave up a single single in his final 3 innings, with 3 strikeouts and 5 groundouts.  His sinker and splitter came back to him and he rode them to strong finish.

After last night's 14-inning affair, the Yankee bullpen has a 4.11 ERA in 28 games.  In 92.0 total relief innings pitched, they've given up 42 earned runs.  By that measure, they fall in the lower half of MLB bullpens.  When you look at how those runs have been given up and by whom, however, the performance of the 'pen starts to look better.

In 13.2 combined IP, the group of Bruce Billings, Vidal Nuno, Chris Leroux, Matt Daley, Cesar Cabral, and Dean Anna have allowed 25 of the 42 ER.  By comparison, the group of David Robertson, Shawn Kelley, Adam Warren, Matt Thornton, and Dellin Betances have combined to give up 11 ER in 59.2 IP.  The core of the Yankee bullpen has been very, very good from day 1.  It's the back end that's been the weak link, something that shouldn't come as a shock considering David Phelps and Nuno have moved into the rotation.  That dynamic played out in textbook fashion last night, when the core group of relievers gave up 1 ER in 8 innings of work and Leroux gave up 5 in 1.

In short, the Yankees have a good enough bullpen to compete and succeed in the AL East.  They just need some help shoring up those last few spots so they don't get exposed in extra-inning games. 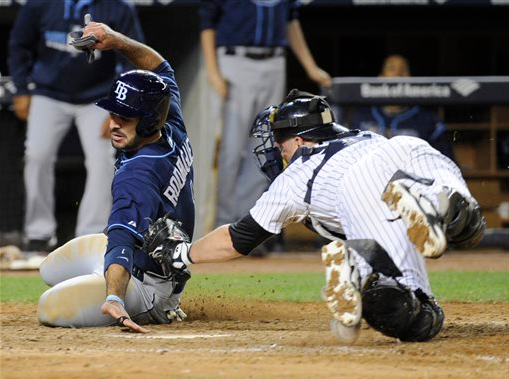