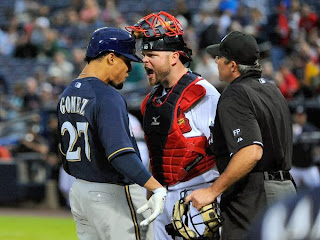 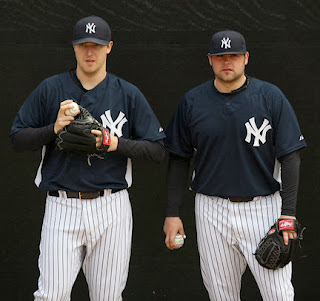 Boone Logan was not part of the group that received qualifying offers yesterday, nor should he have been.  On the strength of his time in New York, he's free to go get himself a fat new contract and in all likelihood that contract offer won't be coming from the Yankees.  His departure leaves a big void in the bullpen for the lefty specialist role next year, but some small September sample size success could be a clue as to who Logan's replacement will be.

That's Cesar Cabral's pitch plot against lefties from his 8 September appearances this season.  In those 8 appearances, he faced 9 left-handed batters.  1 of them got a hit, 1 of them flew out, 1 of them was hit by a pitch (David Ortiz!!!), and 6 of them struck out.  Based on that pitch plot - fastballs on the corners of the strike zone and sliders that were thrown in the strike zone for called strikes and down and out of the zone for swinging strikes - it's reasonable to pencil Cabral in as the early favorite for the LOOGY job next year.  Small sample size or not, that's dominance.

We all know Joe loves to play the matchups when the situation calls for it and we know how much the Yankees like Cabral.  They kept him on their roster all last year when he was injured and all this year while he was rehabbing before giving him his September audition.  If he stays healthy, he could prove to be a cheap and valuable replacement bullpen piece in 2014.

Posted by Unknown at 9:58 AM No comments: 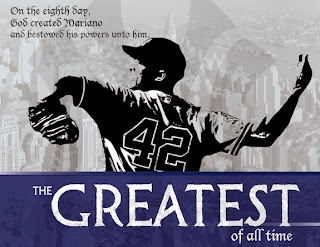 In one of the least surprising awards decisions in the history of professional sports, Mariano Rivera was announced as the American League Comeback Player of the Year yesterday.  In his final season, coming off a major knee injury at age 43, Mo pitched to a 2.11 ERA with 44 saves in 64.0 innings pitched.  The cutter was still cutting, the command was still insanely good (3.5% BB rate), and if you didn't already know that Mo had suffered the knee injury in 2012 you would have never guessed.  His comeback was so seamless and his performance was so stereotypically Mo-like that it was almost as if he never left.

With Mo now retired, this was a fitting award for his final season.  He came back from a major injury, played incredibly well, and got to go out on his terms.  Nobody else in the AL stood a chance.  Congratulations, Mo.  And if this award stirs up anything inside you that makes you want to play next seasons, well that'd be just dandy.