BREAKING NEWS: Curtis Granderson Out With A Fractured Right Forearm

I was hoping it wouldn't be this bad after first reading that he had left the game after getting hit on the right wrist in his first AB of 2013, but the Yankees are calling Curtis Granderson's injury a fractured right forearm according to multiple reporters, and he is expected to be out 10 weeks.

This is obviously a huge unexpected blow to the Yankees and what was expected to be a weaker offense this year.  More details to come on this story as they become available.

** UPDATE 2:29PM- Granderson on the injury- "I was excited. My body was feeling good, mind was feeling good and I was ready to go. Five pitches in we have a little setback. They said it could be worse. Now we rest, recover, get it back and get ready to play whenever that day comes. " (via Mark Feinsand) **

** UPDATE 2:52PM- Via Bryan Hoch, Cash has already ruled out the possibility of Eduardo Nunez being an OF replacement for Granderson. **

** UPDATE 3:19PM- Via Erik Boland, Cash has said that all current replacement options are internal.  We'll see how long that lasts. **
Posted by Unknown at 2:01 PM No comments:

Yanks Not Willing To Give Up Much For Soriano

As the transition from offseason to preseason has been made, the chatter about what players the Yankees might go after to fill out their roster, or at least add depth for the ST competitions, has quieted down considerably.  One player whose name never really picked up a lot of steam was Alfonso Soriano, who the Cubs would love to get rid of and who would have been a great fit for the Yankees' righty OF needs.  Earlier this week, Jon Heyman all but put the final nail in the coffin of any "Soriano to the Yanks" possibility by tweeting that the Yankees weren't willing to give up much in the way of prospects to bring Soriano back.

According to Heyman, the Yankees wouldn't be willing to give up a "good" prospect let alone a top one for Soriano, who still has 2 years and $36 mil left on his current contract.  Heyman did say they would be willing to pay 10 of the remaining $36 million, but with Theo looking to add talent to his rebuilding project in Chicago that bit of financial relief won't be enough to get a deal done if it doesn't include said talent.  When I wrote about the idea of adding Soriano late last year, I said I'd like to have him if the costs required tipped a little more in the Yankees' favor.  If even a good prospect is still a part of those costs, I'm more than willing to pass on Soriano and it appears the Yankee brass is as well.
Posted by Unknown at 10:37 AM No comments: 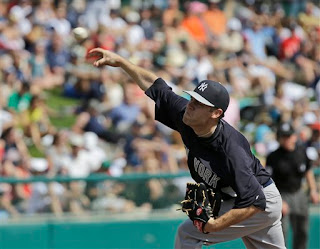