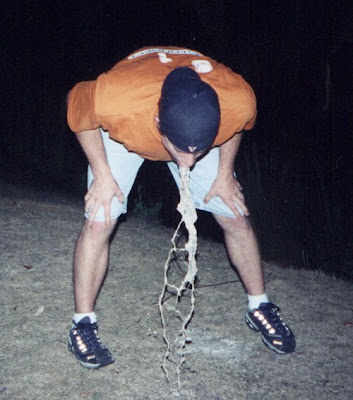 I don't even know what makes me feel more sick: the way UConn played tonight or the fact that they had the game taken from them at the end by the officials.  Both were equally stomach-churning.

Posted by Unknown at 8:24 PM No comments: This shouldn't come as a surprise to anybody as Jeter has used the last 10 years to cement his status as one of the greatest Yankees of all time and one of the most well-known, well-rounded, and well-respected baseball players of his generation.  His numbers over the last decade are incredible:

The stats that Jeter accumulated over the last 10 years are a testament not only to his greatness as a player, but also to his top physical conditioning and toughness that allowed him to play at a remarkably high level consistently for such a long time.  As other players that came up with Jeter or even after Jeter have watched their production fall off as they age, Jeter is still putting up some of the best numbers for his position. The 1,940 hits combined with what he racked up in the late 90s allowed Jeter to become the Yankees' all-time hits leader this past season and he will all but certainly join the 3,000-hit club some time in early 2011.  By the time he finally does retire, Jeter could approach 4,000 hits and will hold many more Yankee records.

In addition to his personal stats, Jeter's list of baseball awards  over the last 10 years is just as impressive:
More than just his stats and awards though, it is the way Jeter has played the game that stands out the most over the last 10 years.  His career over the last decade is littered with memorable plays, from "The Flip" in 2001 to the dramatic home run in the 2001 World Series to "The Dive" into the stands in 2004.  And while it is Jeter's penchant for making his biggest plays in the biggest moments, "The Dive" is the perfect example of what makes Jeter special as a player. 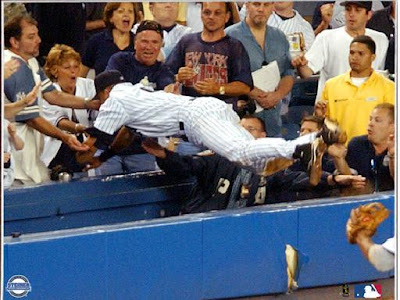 That play right there took place on July 1, during an extra-inning game right smack in the middle of the regular season.  With as much baseball as there was to be played that year, it would be foolish for anybody to risk injury and bodily harm trying to catch a foul popup in a game that was essentially meaningless, but not for Jeter.  He cares just as much about winning a game in July as he does in October and it is that passion and desire that makes him special.

Every game isn't just another game for Jeter; every game is important.  By this point everybody has heard the stories about Jeter never taking an at-bat off or always running hard to first or refusing to take days off even when he is legitimately injured, but the fact that you still keep hearing those stories is precisely why those stories are important.  After 14 seasons, Jeter still plays as hard as he did in his rookie year every time he steps on the field.  He cares about every pitch, every hit, every inning, and every game and has never differed in his approach since Day 1.  It is that approach that has allowed him to accomplish all that he has and build that list of awards above.

In a world where athletes and baseball players are looked at more for what they do wrong on or off the field, Jeter has been the one constant positive example of what an athlete should strive to be.  He remains the gold standard for professionalism and the countless heaps of praise that he receives from teammates, coaches, and opponents is proof of that.  He has gone from being underrated to overrated and back to underrated over the last 10 years in the eyes of the media and statisticians but his reputation amongst his peers has never changed and that is the truest test of just how great a player is.

Derek Jeter is synonymous with the Yankees and the "Yankee Way," and with Major League Baseball in general.  He, more than anybody, is the reason the Yankees have been able to maintain their consistent level of success in baseball over the last 10 years, the one constant in a revolving door of teammates and coaches.  Whatever happens throughout the remainder of his career is irrelevant; when you think back of the 2000s, Jeter belongs right at the top of the short list of players who come to mind as the greatest of this era.  In the 2000s Derek Jeter was the greatest Yankee player by far, and one of the greatest baseball players period.
Posted by Unknown at 1:04 PM 1 comment: