"There's no question. You cannot beat the '86 Mets.  The Yankees teams I played on were great teams with great personalities, but they were good guys. The '86 Mets would've been drilling those guys; I just know how our pitching staff was: hit this guy, hit that guy. And those were the kind of guys we were. We were mad, we wanted them to get outside themselves. That's the kind of group we had that year, so the '86 Mets were a very difficult team to play against."

"They were very good.  I couldn't sit back and go player-by-player. I think the '98 team had much more depth. We had a couple of World Series under our belts, too. We were seasoned to that point. The '86 Mets were just a great team. They won just one World Series, right?"

Oh shit, son!  It is ON!!!  D-Streezy and my man Paulie-O!  And because we're talkin' about World Series rings, each of these cats gets a minute and a half.  DJ, spin that shit!

Quotes via ESPNNY.  And who would be considered Papa Doc in this scenario?  Straw because he was part of the "bad guy" group?  Or O'Neill because he references his group winning more titles and the Free World crew was like the champions of 8 Mile?  I sound like Simmons actually trying to stretch this comparison out.  And yes, I am white as hell.
Posted by Unknown at 2:55 PM No comments: 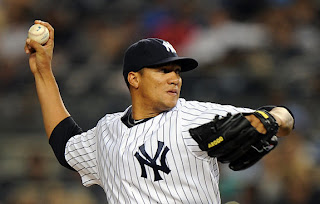 (Hector Noesi: Professional Pitcher.  Courtesy of The Daily News)
While the MSM, the blogosphere, and Yankee fans in general all gear up for the the hype surrounding the CC Sabathia opt out storyline and the "Yu Darvish vs. C.J. Wilson" debate this offseason, there is another potential in-house 2012 rotation candidate who could factor into the discussion as well.  That candidate would be Hector Noesi, the 2011 winner of the annual Yankees' "Top Young Pitching Prospect That We Called Up to Use in The Bullpen Because We Needed a Warm Body" Award.  Larry K did an excellent job yesterday of painting an all-encompassing portrait of Noesi's skill set and 2011 performance, and essentially laid the groundwork for the "Noesi 2012 Rotation" discussion.  But beyond his own makeup and 2011 results, there are other outside factors that could play a role in determining the plan for Noesi in 2012.  Those factors are Ivan Nova and Phil Hughes, specifically the different paths that each of them took in 2011 and how those paths intersect with the path Noesi is currently on and the path he could be on next year.