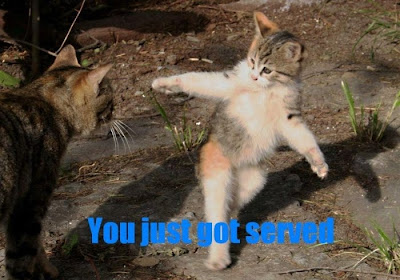 Joel Sherman A Little Late To The Party

Now I'm a Joel Sherman guy. I read his stuff on a daily basis and usually agree with the messages in his columns, but today's column on Jeter Vs. Tiger was just plain sad. With pitchers and catchers well into their spring work and live batting practice taking place today, there wasn't anything better to write about than the long outdated "Tiger is a douche; Jeter is the man" comparison?

Newsflash, Joel. AB4AR was all over this shit back in December while Tiger was still picking his teeth off the sidewalk and putting bags of frozen peas on his battered face to cover up the bruising . Don't tell me what I already know; give me some insight and logic; be a fucking journalist. Leave the Tiger Vs. Jeter analysis for pee-on bloggers like me to handle.  Because quite frankly, I handled it a hell of a lot better than you did.

P.S.- The Tiger Slow Jam Remix is still hilarious.
Posted by Unknown at 12:53 PM No comments:

Jeter OK With Having To Wait To Negotiate New Deal (SHOCKER!!!) 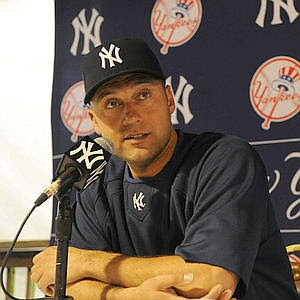 So everybody is jumping on Jeter's press conference from yesterday and talking about what he said, but here are the only quotes that matter:

Jeter: “I’ve said from Day One, this is the only organization I’ve ever wanted to play for, and that’s still true today."

Jeter: "I was a Yankees fan growing up. This is where I want to be. I’ve never envisioned myself playing anywhere else..."

Jeter: “It’s unfair to talk about myself when we are trying to win."

Cash: “He is priceless for the fans, we know that."

It's real simple, folks. Jeter isn't going anywhere. All the quotes above get back to what I said a few weeks ago. Both sides recognize how important they are to each other and both know how they will be viewed by the fans and media if a deal doesn't get done.

ESPN can try to create all the controversy they want by having George Smith report on Jeter's statements and talk about the "silence" coming from the Yankees, but this is nothing new. The Yankees have had the "no negotiating extensions before a contract expires" policy since 1998. That's not going to change for even Jeter; he knows it, Cash knows it, everybody else should know it and shut up about it. At the end of the day Jeet is going to get his money, but he's going to get it at the end of the year when his contract is up per Yankee SOP. Being the ultimate team player and consummate professional that he is, Jeter is perfectly fine with that situation and so everybody else should be fine with it too.
Posted by Unknown at 10:24 AM No comments: