Well everything looked to be sunshine and lollipops in Yankeeland after the consecutive beatdowns of the Indians and Orioles, and then the Yanks went north of the border and ran into a little trouble  in the form of the surprising Toronto Blue Jays.

On Friday, the Yankee offense was shut down by someone named Brett Cecil (yeah, I don't know who the hell he is either) for 8 innings, and Jose Bautista made A.J. Burnett his bitch, cracking 2 home runs and helping chase Burnett after 6 bad innings.  The Yankee offense managed just one run, scored by the immortal Chad Moeller on a Nick Swisher GIDP in the 6th inning, and Robbie Cano took an 0-fer to end his recent hitting streak.

Yesterday the Yankees wasted another solid Andy Pettitte outing (7+ innings of 2-run ball complete with 10 Ks) by getting worked by Ricky Romero for 8 innings.  The heart of the Yankee order went a combined 1-18 for the game, and only Derek Jeter seemed interested in hitting the ball and scoring runs as the game moved into extras before the Yanks were finally beaten in the 14th inning by an Aaron Hill RBI single off of Chad Gaudin.  And honestly, when you have Chad Gaudin pitching in the 14th inning of a tie game, you have to kind of expect that outcome.

Now onto today, where the Yankee offense once again stumbled out of the starting blocks, getting shut out for 7 innings by Brendan Morrow.  Luckily, Morrow hit the wall in the 8th and his bullpen didn't help him much, allowing 4 Yankee runs to score, the 2 go-ahead ones off the bat of Cano.  Joba did his damndest to give the game back to Toronto in the bottom of the 8th, but was able to work out of trouble and Mo locked it down in the 9th inning to give the Yanks at least one victory this weekend.

The good news from the weekend was that the Yankees are still getting very good starting pitching.  Sure A.J. sucked on Friday, but that's what he is and if you can't accept that by now, then you just shouldn't be a Yankee fan.  Andy was fantastic yesterday for almost 8 innings and his 10 strikeouts were a season high and something he didn't seem capable of anymore.  And today was another great outing for Javy, who went 7 innings, allowing 2 ER on just 1 hit.  He got in trouble with 4 walks, but battled out of everything and struck out 9 batters of his own, a sign that both his stuff and his confidence are improving and coming together at the same time.  The rotation finally seems like it is forming into the dominant group that everyone wished for when the season began.

The bad news was that the offense continues to sputter.  It wasn't much of a weekend for The Horse, who is taking a lot of bad swings after his big 6-RBI game earlier in the week.  And Mark Teixeira is completely lost at the plate again.  He was 0-6 with 5 Ks yesterday, and is such a mess at the plate that he had a meeting with Kevin Long after the game to try to get his shit figured out. 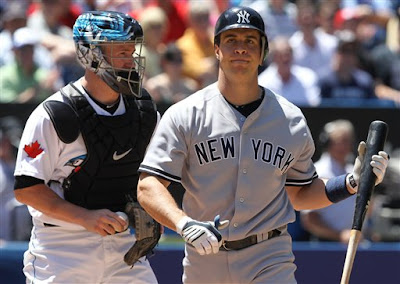 (Photo courtesy of The AP)
At this point in the season, the time for patience is over.  Teix isn't some rookie or 2nd-year guy trying to complete his adjustment to Major League pitching.  He's a fucking veteran and it's time he started acting and playing like it.  I, like everybody else, has been saying that sooner or later it was all going to come together and the offense would click, well that time better be sooner now for Teix because if it isn't, then he's going to start hearing a few more Bronx cheers when he gets back home.

Also worth noting was Dave Eiland announcing that he's taking a leave of absence from the team.  What's that about?  And who is going to take over his job of standing in the dugout too long when pitchers start blowing up on the mound?
Posted by Unknown at 4:26 PM No comments: