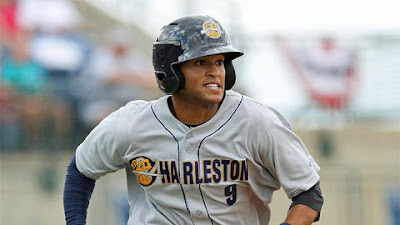 As good as he was last season, the Yankees have always held their own against Justin Verlander.  They were looking to do the same last night and to get the focus back on the field and off the latest off-field drama.  Opposing Verlander was Ivan Nova, the man who has been the Yankees' best starting pitcher so far this season, but he would not have a good night.  Fortunately for the Yanks, Nova's struggles were just the opening act to the 9th inning theatrics.

- Nova became the latest victim of Raul Ibanez's astoundingly bad defense in the 2nd, when Ibanez botched a sinking liner and turned a single into a triple to the wall. Don Kelly, who had walked to lead off the inning, scored from first.  It was definitely as .gif-worthy as Ibanez's flop in right field earlier in the season and I hope to have it soon.

- Even chalking that run up to Ibanez, it wasn't a very good night for Nova.  His command in the zone has been inconsistent and it was a tick worse last night, especially with the fastball.  He caught too much of the plate too many times and the Tigers hitters weren't missing, scoring 3 runs in the first 3 innings.

- Nova was off his game, but the Yankee offense did what they usually do off of Verlander and chipped away to keep the game close.  A-Rod led the way, scoring Curtis with an RBI single in the 1st and then smoking an opposite-field HR in the 3rd to make it 3-2.

- Russell Martin dusted his quiet bat off and cranked a 2-run homer to give the Yankees a 4-3 lead after 5 innings, but Nova promptly gave back 2 runs on 7 pitches and exited with just 1 out and 2 men on in the top of the 6th.

- The bullpen took over from there and held the Tigers scoreless through 3.2 innings, setting up the late-inning drama.  D-Rob and Mo were very strong, striking out 3 in their 2 innings.

- Joe had yet to get tossed this year, but got the gate in the 7th after arguing balls and strikes with Joe West, who may have been a contributing factor to Nova's rough night.  If Joe was looking to spark the Yankee offense, he certainly got the result he was looking for, as a pair of singles from Robinson Cano and Rodriguez and a Mark Teixeira sac fly tied the game at 6 in the 8th.

- Jim Leyland decided to keep Jose Valverde on the bench in the bottom of the 9th and go with Brayan Villarreal and might have cost his team the game with that decision.  Jeter worked a 1-out walk, took 3rd base on a wild pitch, and scored on a heads up baserunning play after a passed ball by Alex Avila to win the game.  Not your usual walk-off win, but a win nonetheless.