So this must have been what Scott Boras was talking about when he said other teams were interested in signing Damon to a 3-4-year deal.  I have to say, I didn't see this one coming from Boras; it's one thing to try to hoodwink a team into giving a guy a longer and more expensive contract than he's worth at this stage in his career by creating fake, nonexistent interest from other baseball clubs.  But when you go outside the sport and bring the WWE into the fold, that's a whole new level of negotiation.

After seeing this performance last night, there's no doubt Cash is frantically searching for his checkbook right now to cut a $60 million check to Damon, especially with the newly created void in the outfield as a result of the Javy-for-Melky trade that I'm not even remotely close to being done talking about yet.  Did you see how limber he looked crouching and pointing to the crowd?  How about the interaction with the fans on his way to ring?  Or the textbook D-X crotch chop?  This guy is clearly already in mid-season form physically and showing the Yankees and all other interested teams (assuming they actually exist) that he's serious about getting out there and getting after a 3rd World Series title in 2010.  I mean, if showing up on Raw and cutting a painfully bad promo with Eve Torres, the Bella Twins, Carlito, Chris Masters, and a now apparently gay Sgt. Slaughter backstage doesn't say you're dying to sign a big-money deal and commit yourself to winning then I don't know what does.

Boras is playing hardball now, and if the Yanks don't start taking these negotiations a little more seriously, they could be watching Damon winning Tag Team gold with The Miz next season instead of cracking another 20 HRs and scoring 100 runs for them on their way to a 28th championship.

Put me in coach, indeed.
Posted by Unknown at 1:49 PM No comments: 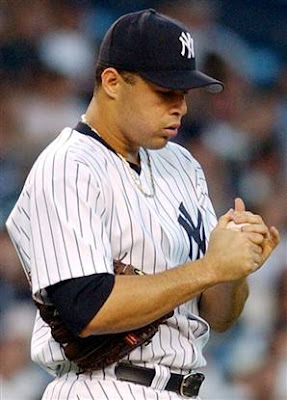 This is it, Cash?  This is your big move that we've been waiting for?  This is why I told everybody to calm down when they were freaking out about Damon-for Johnson??  Javier Vazquez???  Javier Fucking Vazquez????  The guy who defines what it means to not be able to handle the pressure of pitching in New York?  You're kidding, right?  Please go on the Michael Kay show this afternoon and tell everybody you were just kidding.

This is the guy who came into the fateful 2004 ALCS and gave up a grand slam to Johnny Damon on his first pitch.  This is the guy whose inneffectivenes got the ball of bad trades and signings rolling in the mid-2000s and paved the way for the likes of Jaret Wright and Carl Pavano to fleece the Yankees by taking millions more than they were worth to completely suck.  Now you want to bring him back?  For what?  Were you afraid the staff's WHIP was going to be too low next year?

Vazquez's career is a constant up-and-down roller coaster performance that peaks when he plays for bad teams and dips when he plays for teams that have even a slight whiff of being a contender.  Case in point: Vazquez was a monster during his time in Montreal when his team was usually mathematically eliminated by mid-May; he was terrible in New York when his team was the odds-on favorite to win the World Series; last season he was brilliant for an Atlanta Braves time that, for the first time in almost 20 years, was not a major playoff contender.  The bigger the moment is, the more he disappears; and this is supposed to be the guy who's going to bolster the back end of the rotation?

I could give 2 shits about Arodys Vizcaino, but Michael Dunn was kept out of the C-Grand trade because he was expected to assume the role of 2nd lefty in the bullpen, a spot that could become increasingly more important if Marte gets hurt or starts shitting the bed next year.  Now Cash is including him as a throw-in for Javier Vazquez?  What is this, baseball's version of Black Friday?  Somebody explain to me how trading an above-average outfielder with 20-HR, 80-85-RBI potential and 2 quality prospects, one of whom could have been a big factor in your bullpen in 2010, for a pitcher with a losing track record in big spots who has played for 4 teams in the last 6 years makes your team better?

The one positive that comes from this is that the Yankees now know what their outfield is going to look like in 2009, with Brett Gardner most likely assuming the center field role and C-Grand heading to left.  But I would have rather had Melky and Gardner splitting time and forming a dynamite late-game outfield along with Granderson than have Javier Vazquez poisoning the back end of the rotation.

I don't want to say Cash has lost the Midas touch, but he better have something else up his sleeve after this deal because this is not what I, and probably many Yankee fans, had in mind after the Nick Johnson signing last week.