As The Joba Turns 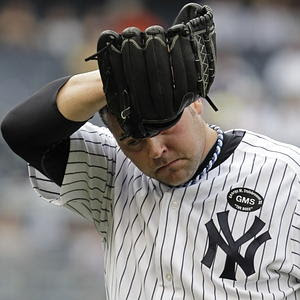 (Photo courtesy of The AP)
A lot of disconcerting info on Joba in Joel Sherman's 3UP post today:

I almost threw up my breakfast when I read those numbers and I slept in too late to even eat breakfast this morning.  Joel continues:

"In other words with 60 percent of the season gone now, Chamberlain has arguably been the worst regularly used reliever in the majors. He certainly is in the conversation. Which is ridiculous considering his stuff, which might not be what it was in his electric 2007 debut, but is still certainly better than his performance."

It appears that Joe Girardi is on the brink of removing Joba from the eighth inning and going with David Robertson, instead. But here is something else to keep in mind: Is it possible that the Yanks would send Chamberlain to the minors as a way to a) work through some of the issues with his inconsistency and b) to shake up a guy who just might need to have his world jolted. Chamberlain has always struck me as the kind of player who gets way too comfortable in the majors. Maybe he needs to be reminded that he needs to consistency earn his way up here and that nothing is a given."

And now, once again, it's time for the yearly "what to do with Joba?" discussion that everybody loves so much.  The grumbles about his performance have turned to dull roars over the last month and there are suggestions aplenty.  Unfortunately most of those suggestions are wrong.  Here are the CORRECT answers to the 3 most asked questions surrounding Joba.

1) Should the Yankees trade Joba?

Fuck and no.  Trade him for what?  Cliff Lee?  Already gone.  Dan Haren?  Already gone.  Roy Oswalt?  Almost definitely not interested in being traded to the Yankees so no.  And is it really worth using Joba in a package to bring in Adam Dunn to be the full-time DH?  As I discussed last Friday, the Yankee offense is waking up and they're doing it without the benefit of a "big name" DH.  They're still winning games with a struggling pitching staff right now so why waste Joba and other prospects to add a piece they don't need?

The only way trading Joba makes sense is if the Yankees bring back an improved bullpen option in the deal, such as Joakim Soria.  But the word on the street is Kansas City's asking price was pretty high for Soria, so  the Yankees would be faced with swapping one 8th-inning option for another while having to throw in additional prospects.  That just doesn't make any sense right now given that the Yankees are winning and given the fact that even with Soria in place of Joba, the bullpen would still be riddled with holes.

With what is out on the trade market right now and what the Yankees true needs are, there is no way to trade Joba and get back equal value without giving up more in the process.  Let's not forget that he's still just 24 years old.  Just because he's pitching like Kyle Farnsworth right now doesn't mean he actually is a washed up bag of shit like Farnsworth.

2) Should Joba be sent to the Minors to work things out?

Once again the answer is "No."  Yes, he's just 24, and yes he seems to have all kinds of problems with repeating his delivery, being aggressive, and maintaining a calm, confident demeanor on the mound.  But the time for Joba to be in the Minors has come and gone.  He's a Major Leaguer now and has been for 2 full seasons.  He needs to work out his issues against MAJOR LEAGUE competition because those are the guys that matter if he gets them out or not.

Sure, Joba can get sent down, work on his mechanics, and blow away a bunch of Triple-A hitters for a few weeks.  And I'm sure that will make him feel just dandy about himself.  But then when he comes back to the show, how do you guarantee he can replicate that success and maintain that newfound confidence the first time Vlad Guerrero gets ahold of one in the 8th and parks it off the facade in left field?

The only way for Joba to truly fix his issues is to do it against Major League hitters in Major League games and hold leads for Mo.  That's what he is in the bullpen to do, and if he isn't getting it done, then no amount of time spent beating up on Triple-A players is going to fix that.  I don't give a fuck if he strikes out every batter he faces in the Minors if he's just going to come back up to the Yankees and fall back into his old habits of not following through in his delivery and walking everybody and their mother to load the bases.

If he needs to fix mechanical problems, then get in the fucking 'pen with Eiland and work on them.  If he needs a kick in the ass because he's a lazy slob, then Joe should pull him into his office and chew him out or some of the veterans should get on him about his work ethic.  The time for coddling Joba is over.  The Yankees have fucked him up with the way they've handled him over the last couple seasons and now they need to un-fuck him at the Major League level.  Which brings me to my last point...

Absolutely 100% "Yes" on this one.  We've seen it happen to pretty much every other reliever in the 'pen this year so why should Joba be excluded?  D-Rob was garbage early in the season and you saw him disappear from his 7th-inning role to pitching lower-leverage innings in the 6th and sometimes 5th.  Chan Ho Park went from key 7th-inning, sometimes 8th-inning guy to blowout mop-up duty now.

The sad truth is that Joba is pitching like shit right now and doesn't deserve the role he has.  When he's on the mound right now he doesn't hold the lead and doesn't give his team the best chance to win, and that's what being the setup man is all about.  He's giving up too many walks, too many hits (even if some are lucky), and doesn't provide that warm, fuzzy feeling that he used to coming in ahead of Mo.

Dave Robertson has been pitching much better of late and deserves a shot at being the new setup guy.  Joba and he should switch roles and Robertson should get a crack at being the bridge to Mo.  This move would actually help the Yankees on a multitude of levels.  It would reward Robertson for the good job he's done lately and possibly provide him with more confidence, it would give the team the best chance of holding close leads and winning close games, and it would allow Joba to work on fixing his shit in lower-leverage situations without going to the Minors to do it.

Being demoted in the first place would serve as the ass kicking that many people seem to think Joba needs to get motivated again, so there's one plus.  And even if it isn't in a 1-run, 8th-inning spot, being able to come in and shut down Major League hitters is far more valuable than doing it against Minor League guys.  If Joba can get his mechanics figured out, get back to locating his pitches better, and build a little more confidence as a 6th or 7th-inning guy at the Major League level, that's a much better result for the Yankees than waiting for him to get done in Triple-A and then hope he can replicate that success when he comes back.

So there you go, kids.  All your questions answered quickly and painlessly.  It's sad and pathetic that we still have to have these conversations about Joba after all this time, especially the ones related to motivation.  If you can't get motivated to perform as a professional athlete, then you have something wrong with you, in my opinion.  The Yankees can't fix what they've already done to screw up Joba, but the time for handling him with kid gloves has come and gone.  He needs to be removed from his setup role and kicked down the totem pole a bit, and forced to fix his issues in the Majors.  If he does, great, it gives the Yankees more bullpen depth moving forward.  If he doesn't, oh well, he will either get no meaningful innings in the postseason or lose his innings altogether to other guys who are pitching better and deserve them.
Posted by Unknown at 12:50 PM No comments:

Well maybe I got a little ahead of myself on Friday when I all but guaranteed The Horse would crank number 600 this past weekend.  And obviously he didn't, but there's still reason to celebrate. 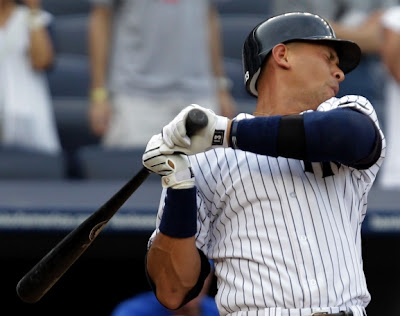 (Photo courtesy of The AP)
All those lucky fans who were at the stadium yesterday got to see A-Rod rack up his 152nd career HBP in the bottom of the 8th.  It's not quite as awesome as joining the 600-HR Club, but there's still something to be said for a centaur that has been able to take that many shots over his career and keep on trucking.

So congrats, A-Rod.  You continue to break down barriers for professional athlete centaurs everywhere.

P.S.- Anybody who is concerned about A-Rod going into a homer drought because of the "pressure" on him to hit 600 can cram it right now.  Dude smashed the ball all weekend.  It's only a matter of time.
Posted by Unknown at 8:42 AM No comments: