We kicked AB4AR's offseason focus into high gear this week.  If you missed any of the early free agent profile posts, you can find the whole 5-pack right here.

If you've been following the offseason news at all, you know that these aren't the only 5 guys the Yankees are targeting and I can assure you they won't be the only 5 profiled this offseason.  They're just the high profile tip of the FA iceberg.  Be on the lookout for more FA profiles to come as the stove heats up.
Posted by Unknown at 3:00 PM No comments:

How Will The Kuroda-To-Japan Rumors Impact The Yankees' Offseason Approach? 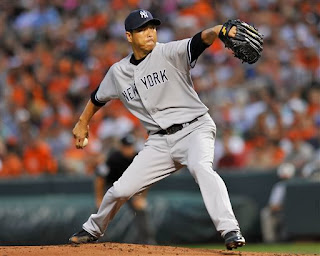 In just 1 day we'll find out the decisions of the 3 players the Yankees made qualifying offers to this week.  The early signs on Cano and C-Grand point strongly towards them declining the offers, but there hasn't been much talk about Hiroki Kuroda.  He's a very quiet guy in the media by nature and there isn't anybody in the mainstream Yankosphere who's gotten a word out of him on what his thoughts might be.

The few reports that are out there right now make it sound like Hirok is leaning towards returning to Japan to pitch next year.  That's always been part of his retirement plan and it stands to reason that he would want to be able to go back there and pitch while he could still be effective.  Kuroda has fallen off in the 2nd half of the last 2 seasons, maybe he's taking that as a sign that it's time to get out of MLB while he still has something left in the tank.