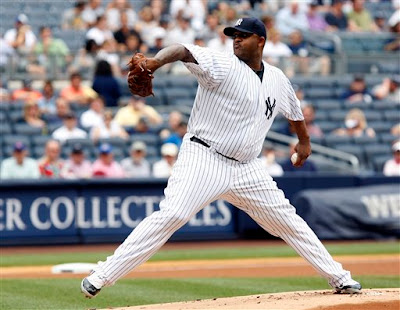 (Photo courtesy of The AP)
CC!  Good to see you.  Especially so late in the game.  I didn't think you were allowed to be in the game this late anymore.  Musta almost forgotten what the 7th inning felt like, huh?  Still rocking the parachute pants and custom Air Jordan baseball spikes, I see.

Well it's good to have you back, buddy.  Let's keep these quality 7-inning, 7-K, 1-walk outings coming, alright?

How the fuck are the Orioles still a professional baseball team?  Somebody hust disband them already, burn that stadium down and distribute their players to the rest of the franchises still left in Major League Baseball.  And when you're done doing that, do me a favor and start spreading the fucking news.
Posted by Unknown at 3:38 PM No comments:

The Ship Is Almost Righted

Another day, another beatdown of an overmatched ballclub.  I thought this next stretch of games would be important in helping the Yankees get it back together and they certainly have not let me down, taking 5 of 6 already from the Indians and Orioles with the fugazi Blue Jays and Astros still on tap.

Hughes was masterful last night, throwing 7's all over the place (7 innings, 7 Ks, 7th win of the year).  Most importantly, he changed his approach up early when the cutter wasn't working.  Hughes worked primarily off the fastball and curve last night and once he substituted the curve for the cutter the Orioles really had no chance.  Joe might not commit to him right now as an All-Star, and even if he does make the team there is no chance in hell he plays in that game, but right now Phil Hughes could very well be the STARTER of the All-Star game with the way he's pitched.

Robinson Cano is on another tear right now rivaling the one that he kicked the season off with.  He's top 3 or top 5 in almost every major offensive statistical category and now it's getting to the point where we can all stop talking about if he's the best second baseman in baseball and start talking about where Cano stands in the hierarchy of best players in baseball period.

It was good to see Jorge back in the lineup last night, especially at DH where he belongs now.  Jorge can say he's still a catcher all he wants, but the fact is his body can't hold up the physical stress of catching anymore and his offense is always going to be more valuable than what he gives the team defensively.  That and the fact that Frankie has more than proven himself capable of being an everyday Major League catcher.

Yessiree, things are brightening up in Yankeeland again.  Jeter is pounding the ball again, The Horse continues to get it done even without his usual power numbers, Jorge is back, C-Grand is back, Joba and Mo have rid themselves of their hiccups, and the rest of team from top to bottom is producing more than well enough to cover CC and Teix's struggles.  They still aren't quite hitting on all cylinders, but at some point this summer, it's going to happen and when it does, all Tampa can do is close their eyes and hope the train doesn't hurt them too bad as it goes flying by.

P.S.- spare me all the "they're doing it against shitty teams" routine.  Yeah, they are doing it against shitty teams, but that's what good teams do, they beat the shitty teams.  And not just beat them, but beat them down, outclass them.  And that's what the Yankees have done over the last week, minus one bullpen meltdown.  So quit looking to pick nits and just sit back and enjoy the show.
Posted by Unknown at 9:39 AM No comments: