Doing Easter Sunday with the girlfriend's family this weekend.  It'll gives me the chance to meet her aunt who hooked me up with all my presale tickets for the Yanks-Brewers series next month (and pay her for said tickets), but it also poses a possible playoff hockey dilemma.  Rangers-Flyers Game 2 is Sunday at 11 AM Central, so I'm trying to figure out how to balance the necessary social interaction with the fam while still getting my Rangers fix in.  Now that Time Warner has eliminated CNBC from their basic cable package, I wasn't able to watch Game 1.  It's all terrible vexing.  Now onto the links!

- On Monday, Chad Jennings of LoHud pondered the second base situation in light of Brian Roberts' back injury and slow start.

- On Tuesday, el duque of It Is High... looked at the organizational depth at first base to see what the Yankees next move would be if both Teix and Kelly Johnson got hurt.

- Matt Bove of IIATMS/TYA broke down Brett Gardner and Jacoby Ellsbury's solid starts and how they're both living up to their new contracts early on.

- On Wednesday, Chris Mitchell of Pinstripe Pundits examined the downside to Kelly Johnson having to sub at first base.

- Joe Vitulli of Yanks Go Yard commented on Ichiro's hot start and how well he seems to be handling his new limited bench role.

- On Thursday, Vizzini of NoMaas provided plenty of valid reasons for why people should not freak out about CC Sabathia's start to the season.

- Mike Axisa of RAB analyzed the the Yankees' new shift strategy and how it's impacted their defensive effectiveness and their opponents' hitting performance against them.

- On Friday, Daniel Burch wondered what the Yankees will do with their infield when Brendan Ryan returns from the DL.  He's tagged Dean Anna as the odd man out.

It came to my attention that there has been a glaring lack of female artists on the Friday Jam mix.  In fact, I haven't had a chick on for the Friday Jam since June of 2012.  Let's rectify that, shall we?  Boom!  Little "Magic Man" right in your grillmix.  2 chicks at the same time.

Enjoy your Easter weekends, everybody.
Posted by Unknown at 3:16 PM No comments: 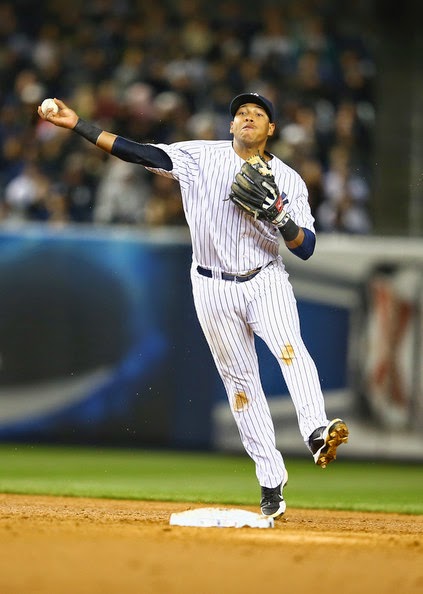 The .429 BABIP is still unsustainably high, but there's reason to believe this is more than just Solarte getting lucky in a small sample size.  He's got a 10.3% BB rate and a 13.8% K rate, so he's displaying an understanding of the strike zone and some good contact skills.  He popped his first career home run last night too, and his .196 ISO is more than good enough to get it done in an everyday or bench role.  Eventually the BIP luck is going to turn and his numbers will go down.  For now though, he's fun to watch and he's giving the Yankees way more than they hoped for.  Strange to say, but he might be the most popular Yankee in town right now.
Posted by Unknown at 11:00 AM No comments:

Poetry in motion right there.  Solarte (who's not a natural third baseman) with no hesitation going to the third base bag, Roberts with a quick turn at second, and Sizemore (who was playing his first career game at first base) with a nifty scoop at first.  It would have been ludicrous to suggest it at the time, but looking back on it now, that was probably the game.  Once Tampa came out of that inning with no runs, they didn't have a chance to keep up with the Yankee offense.

P.S.- I'd call this "amazing" but this is kinda CC's thing.  3rd triple play he's had turned behind him since joining the Yankees.  Wild stuff.
Posted by Unknown at 8:28 AM No comments: 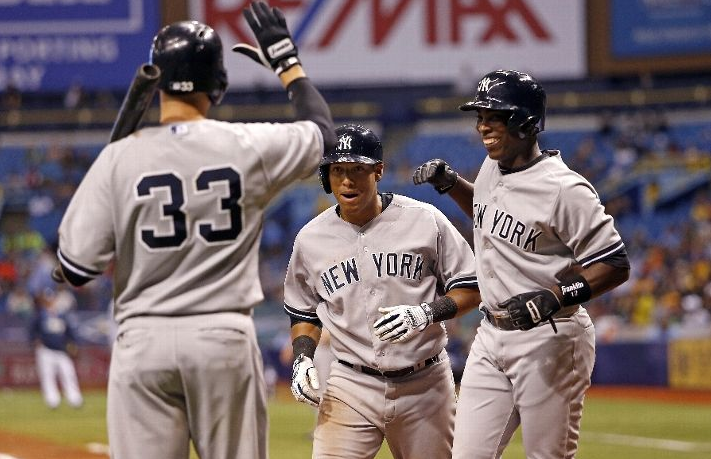