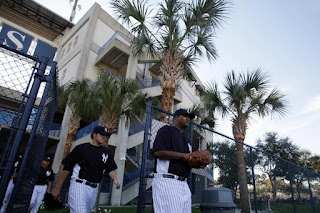 (Two important parts to this year's rotation.  But what about next year?  Courtesy of the AP)

To say the starting rotation is critically important for the Yankees in 2013 is an understatement.  The front office willingly took a step back offensively to make filling out the 2013 rotation the priority this past offseason, and so far in camp things are coming together nicely.  Ivan Nova has had two strong starts, Hiroki Kuroda looked outstanding yesterday striking out 6 over 4 scoreless IP, David Phelps has been steady and consistent as the 6th starter, and the rest of the projected starting five are scheduled to make their 2013 debuts in the very near future.

The rotation should be the biggest strength of this year's team, but on a parallel path of importance this season will be how this year's results influence the plans for next year's rotation.  The Yankees will have a lot more work to do building next year's rotation under the payroll crunch and will be using this season's performances to gauge how and if their current collection of young starters factor into next year's plans. 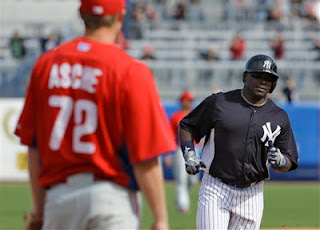 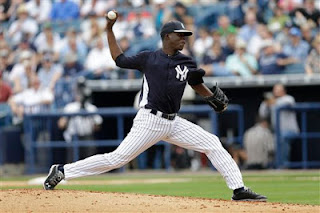 I left Ramirez off the AB4AR Top 30 for the second year in a row because of his spotty history with consistency and injuries, but also because the Yankees didn't seem sure how they wanted to use him.  After this spring audition, there's no doubt that Ramirez should be molded as a starting pitcher and a potentially top-flight one at that.  He's got great velocity, improving mechanics and command, and a really high upside if he continues to refine his changeup and makes his slider a useful third pitch.  Without a lot of high-end pitching talent in the upper levels of the system, he can really make a name for himself with a strong season in Double-A and I've already got him marked as one of my big breakout candidates for 2013.