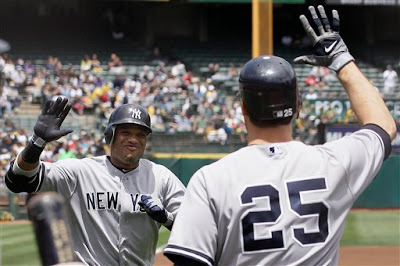 (Lotta high fives for these 2 yesterday.  Courtesy of The AP)﻿

CC Sabathia had a poor outing 2 starts ago, and a poor inning that tarnished an otherwise good start his last time out.  He was on the mound yesterday looking to correct his recent flaws and help lock up another series win for his team.  The weak Oakland offense was an ideal opponent against which to do both of those things, and with the percolating Yankee offense backing him up, everything played out quite nicely for the big fella.

- CC did not get off to the start he wanted, giving up a run on a pair of singles in the bottom of the 1st, and loading the bases on a pair of singles and a walk in the 2nd before escaping unscathed.  His fastball command, the biggest issue he's had this season, wasn't there early.

- Robinson Cano quickly erased the 1-run deficit in the 2nd, hitting his 2nd HR in as many days on a 2-1 fastball from Bartolo Colon.  It took a little longer than we hoped it would, but Robbie is locked in at the plate right now.

- A Derek Jeter RBI single in the 3rd gave the Yankees the lead, but CC quickly gave it back in the bottom half when he gave up a HR to Josh Reddick, his 2nd of the series.  CC really labored through the first 3 innings, and it was shaping up to be a battle of attrition on the mound.

- Mark Teixeira hit a solo HR in the top of the 4th to give the Yankees the lead back 3-2, and it was the way in which he hit it that was impressive.  Teix worked his way back from 0-2 to 2-2 before ripping a 2-seamer to right.  It was the type of AB he hasn't been having at all this season and a step in the right direction.

- From that point on, it was all Yankees.  The offense tacked 2 on in the 5th and CC started to find his command, retiring 9 of the next 10 batters he faced to work through the 7th and keeping the A's scoreless.  Once again, CC managed to turn chickenshit into chicken salad on a day where he wasn't at his best.

- More insurance runs came in the form of a Jeter RBI HBP with the bases loaded in the 8th and a 2-run homer by Teix in the 9th.  Cory Wade and Cody Eppley worked the final 2 innings cleanly.